Richard Garriott: Man on a Mission

I was lucky enough to hear Richard Garriott, gaming impresario and private astronaut, recount his personal tale of his mission to space at Yuri’s night at Ames in 2010 – and what a story it is. 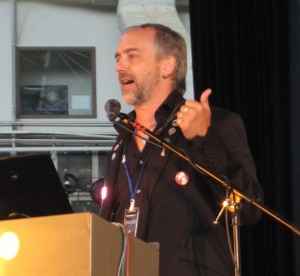 Yuri’s night at NASA Ames was quite an experience in itself. A two-day celebration of all things space, at a NASA centre, with DJs in an aircraft hangar, an incredible aerobatic experience, an education day, chance to drive a small rover, with all sorts of fascinating people sharing their experiences (as diverse as helping to set up Apple, to being part of the team that smashed something into the moon).

But back to Garriott, he opened telling us that his father was an astronaut, their neighbours were astronauts, he just assumed that he too would be an astronaut. I tried to get my head around what it would be to grow up in that environment. Even the thought of meeting an astronaut seemed impossible to me at that time. Imagine if your Dad was one. Wow. I was hooked on the tale. He continued, explaining the lengths he went to to get to space. It was unlikely I’d follow in his footsteps earning millions in gaming, but somewhat surprisingly, Richard didn’t come across as a spoilt rich kid, no, this guy had passion. It was exciting, it was infectious. You can’t just buy yourself a seat on NASA’s space shuttle fleet (though political muscle might get your further), so how’s a guy to get to space? Simple. Approach the Russians. Garriott secured himself not just a seat, but the first private astronaut seat on the Soyuz. A collapse in share prices (which forced him to sell his number one spot) and one major surgery later, Richard was on his way to space, via Star City. It was an incredible tale, still untouchable, but inspiring.

I was honoured to be at the UK screening of Man on a Mission, the (you might say, obvious,) result of Richard’s space adventure. He introduced the film, with some heartfelt thanks to people in the room that had been part of his life during the journey and we watched an hour of space-geek fantasies unfold on the big screen.

The film crew had fantastic access at Star City in Russia, a place that my SpaceNomad adventures have not (yet) taken me. Watching the hulking Soyuz rocket rolling down the track to the pad was awe-inspiring. Hearing about how he’d sneaked a camera in and illicitly filmed the re-ntry of the Soyuz capsule made my eyes wide with wonder (as did the off the record comments about this he shared when the film was over).

It was an excellent film, full of action and adventure, and best of all it’s true. I felt slightly that it focussed so much on the undeniably awesome sight of the rocket launch and space travel experience that something in the telling was missing, compared with the personal account I heard in Mountain View. Despite this, I would recommend it to anyone, not just members of the space community. It’s a story about passion, setting your sights on the impossible and then making it happen. That resonates with me especially, but I defy you not to come out without some spark of imagination ignited in your head.

After the film I caught Richard for a brief moment. My recording equipment let me down slightly (hence abrupt ending), but I was reassured that times are changing, and space isn’t just for the rich kids these days. With the proliferation of commercial space companies, as well as a wider global space operation, I’m still quietly hopeful that I’ll have my own film-worthy story one day. (And Richard, if you’re reading this, feel free to get me one step closer with a spare seat/space on a ZeroG flight!)

listen to ‘Meeting private astronaut Richard Garriott, Man on a Mission’ on Audioboo

Oh, and if you ever wondered what it is like to go to the toilet in space (and aren’t squeamish!) listen to this:

listen to ‘How to go to the toilet in space. Games entrepeneur and private space explorer Richard Garriott explains. #ynba’ on Audioboo

Posted in Audio Events Review
No Comments Yet Posted by SpaceKate