I was greeted at Orlando Airport by fellow tweet-up attendees Danny Sussman and Leslie Berg – and what a nice thing to have a landing party when you step off a long haul flight. This is it – I’m here. Hello Florida!

My flight was slightly delayed, so I was entirely confused when Danny started asking something about delays and look blankly at me when I told him I hadn’t realised that I was going to be so delayed until I was up in the air. What he was actually trying to establish was whether I knew that the shuttle launch had been delayed by “at least 24 hours”. These things happen with launches, everything has to be just right, so there is always a chance of slippage. I’m just hoping that it doesn’t slip so much that I have to fly home before Discovery launches.

These are the details we were given by NASA in an email yesterday:
Managers, engineers and technicians are evaluating helium and nitrogen leaks in the pressurization portion of space shuttle Discovery’s right-hand Orbital Maneuvering System (OMS) pod.

The leaks must be fixed before launch, and the decision was made to delay picking up the launch countdown by at least a day. The countdown, which had been scheduled to begin at 3 p.m. EDT today, would begin at 2 p.m. Saturday. The launch would subsequently be delayed until Nov. 2.

These leaking helium and nitrogen seals are unrelated to the fuel leak that was repaired last week, also related to Discovery’s right OMS pod.

Already a few people are having to cancel their places on the NASA tweet-up because they hadn’t planned for slippage. What a shame for them, this really will be the experience of a life time. I’m just hoping that I’ll get to see it happen.

Last night the first little group of us got together for some pizza, @paolody and his wife @misis_catty, @thesuss, @gawainreif, @leslieberg and @therealdjflux. The biggest collection of STS-133 tweet-up folk in one place so far. Delightful. Here’s a slightly blurred picture: 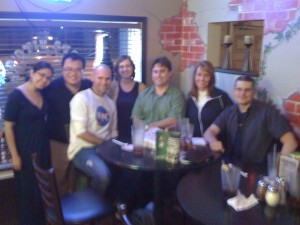 I spent the night at “beta house”. After getting confirmation that I had a place on this tweet-up I set up a Google group in the hope of getting to know a few people before I rocked up here on my own. I’m so pleased that it became a central hub of organisation and led to the formation of at least four different houseshares. The sense of community in this group of strangers (with a shared love of all things space) has been amazing. I’m totally excited about meeting more people. This is going to be a great week. I have declared it so.

Posted in TweetUp
No Comments Yet Posted by SpaceKate