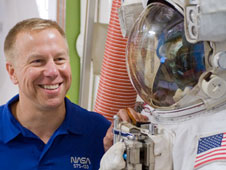 “I would say that the space shuttle is an American icon and it represents the best that America has to offer…  …every time I’ve been able to spend time around the space shuttle and the people that have built it and maintained it and worked with it and trained us on it it’s just a, it really makes me proud to be part of it.”

About an hour ago I heard the news that astronaut Tim Kopra, from the STS-133 crew who are due to fly on shuttle Discovery next month, has been replaced by Steve Bowman. Tim had a bicycle accident at the weekend and has injured his hip, I’m not sure how badly, but the result is that either it was felt he wouldn’t be fit to fly in time, or even if he was fit to fly, he would miss too much training before the mission.

I can’t help but feel quite heartbroken for him.

When I first heard the news that Tim had had an accident I was worried that the launch date might slip. He was the leading space walker on this mission (STS-133) and I’m told that there have not been formal back-up crews for shuttle missions since STS-4. I wondered if there would even be anyone who was sufficiently trained to fill his space, or whether the launch date would slip once again to enable him to recover. There were unconfirmed rumours that Tim had broken his hip, and I guessed that NASA would want to push on and maintain the target date of 24th February. Originally the shuttle programme was due to be finished by now. The last flight was scheduled for November 2010, but there was slippage and it was STS-133 that took the November launch window.

That’s when I flew over, for the NASA Tweet-Up, to watch it launch, but there were delays, technical problems and finally a scrub. Cracks were found in Discovery’s external tank, meaning that further investigation had to be done. Two new windows, in December, came and went without a solution to the problem, and thus no launch. The next opportunity for launch was the beginning of February, but it wasn’t until mid-January that engineers finally understood the underlying cause of the cracking. Additional work to reinforce the tank’s structure, specifically the stringers, was needed. This couldn’t be done in time for the first launch window in February, so again the launch was pushed back to a NET (no earlier than) date of 24th February.

Just days before Tim Kopra’s accident, we heard that the 24th February had become a target date, rather than a NET date. A technicality, but a very important difference, especially to those of us (okay, just me) who have been hanging around the US waiting for this bird to fly. Everything was looking positive for the 24th.

Following the accident there was much speculation about what would happen, and this morning we heard that NASA is still aiming for the 24th, but with astronaut Steve Bowen taking Tim Kopra’s place. Steve will be the first astronaut to fly back-to-back shuttle missions as he was also a member of the STS-132 crew.

But what of Tim? He and his crew have been training for this mission since 2009. They’ve been in quarantine together ahead of the November window. They’ve been ready to walk out to the shuttle and blast into space, only to be told that the launch has been scrubbed. They’ve done goodness knows how many “final” simulations before launch, and now, when there’s finally a new target launch date, Tim is injured and will not get to fly with his crew.

I know from the ups and downs of waiting for this launch as a simple spectator, in awe human spaceflight, that this has been an emotional ride. I am trying to imagine what Tim must be feeling, this was his mission, his final swan-song on the shuttle. I imagine there will be a mix of frustration and sadness, perhaps anger that the shuttle didn’t leave on time. But it is not for me to guess at someone else’s thoughts, I just feel sad for him. I know this would have meant the world to me, been my world, and to have it taken away like that must be really tough.

It’s not like there is even another chance for him to fly on the shuttle. After STS-133 there is only STS-134, and perhaps STS-135 if funding gets approved, but they already have crews, like his, who have been training together for their specific missions. What comes after the shuttle? Well nobody knows really. The only thing that is clear for the next few years is that American will be reliant on the Russians and their Soyuz rocket to get astronauts to and from the International Space Station. Will the commercial sector deliver a human-flight capable vehicle? It looks hopeful, Space X successfully launched and retrieved their Dragon capsule at the end of last year, but even that will take years of testing before it is certified “man-rated”. No-one quite knows what it means to be “man-rated” yet, the only people who’ve ever done this before in America are NASA, so there is much discussion to be had to create an international certification. This is going to take years, not months. I’ve a bet with a friend of mine that it will be more than seven years before America can send people into space again, in their own vehicles. He’s more optimistic, but we shall see. I’ll either be eating my words and cooking dinner or being cooked dinner in 2017.

But back to Tim Kopra, there is nothing that I can do or say that can change things, but I somehow feel like I want to reach out to him. I’ve invited my fellow NASA Tweet-Up friends to write messages that I will send in a home-made card for him at the weekend. if you’d like to send your messages too, I’d be happy to include them. If you’d like to, leave a comment below and I will collate them and send them off in a few days.

Comments saved from internet caches after an unexpected server disaster:

Posted in Opinion SpaceNomad TweetUp
No Comments Yet Posted by SpaceKate