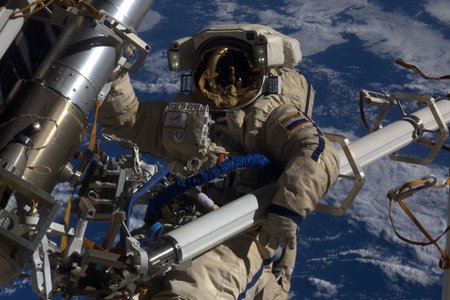 I’m grinning from ear to ear.

As I type this, cosmonauts Anton Shkaplerov and Oleg Konenenko are engaged in a Russian spacewalk, whilst orbiting the Earth at 17,500 mph.

Cameras on the international space station, and also mounted on the cosmonauts’ helmets, are showing me their every move.

A translator relays the conversation between the spacewalkers and mission control in Korolev, Russia.

During this spacewalk the pair were due to move a 46-foot (14 meter) crane from one part of the space station to another and install some shields to protect the station from space debris.

After grappling with the crane they ran out of time for installation of the shields and instead concentrated on taking some swab samples of surface residue from the Zvezda service module. The hope is to study the residue to get a better idea of the space station’s lifespan.

The reason I’m smiling… see CNN LightYears blog for the rest of this post (but in case you’re wondering, it’s because I know Anton and I’m incredibly proud of him. This is his first spacewalk and it’s exciting watching him taking his first steps!) There are some really cool quotes from Canada’s Commander Chris Hadfield, but I’m only allowed to quote the first 150 words of my story before linking to them, so off you go.

Posted in Journalism
No Comments Yet Posted by SpaceKate