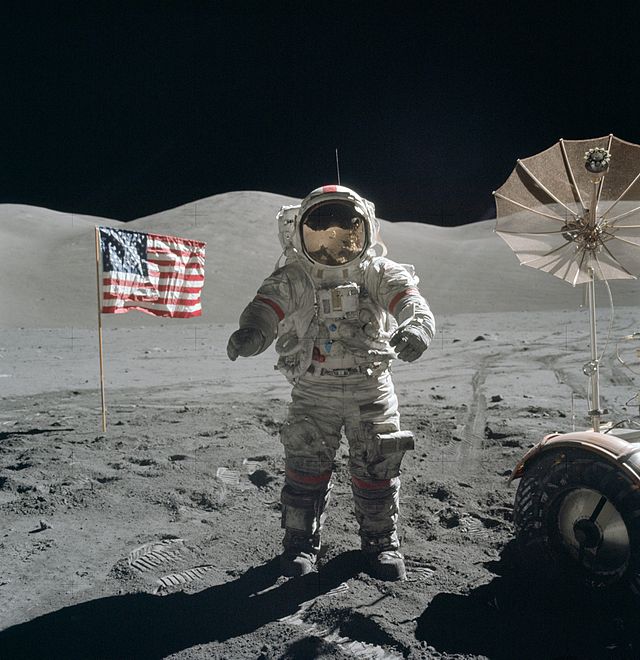 A large bull fills the screen, then there’s a bucking bronco – not the sort you see at events, but a shot of a live bucking bull at a rodeo – its rider clinging on for dear life. Not the obvious first shots for a film about the last man to walk on the Moon; my attention is caught and my interest is piqued. Either the filmmakers have missed the point, or they’re doing something clever and they’re getting something very right.

The camera picks out a face in the crowd. Crisply in focus, you can tell instantly that this man has a story to tell. It’s our hero, Gene Cernan, white-haired and focused. The cinematography is excellent.

Back to the bull riders, twisting, turning, being thrown this way and that – and then the masterstroke, footage of the centrifuges that the Apollo astronauts were trained in – the spinning metal hulks that put them through their paces and tested them to the limits, just like the bull riders are tested to theirs.

They’ve got it right. I settle in to watch The Last Man on the Moon with renewed excitement.

The Last Man on the Moon -Trailer from Mark Stewart Productions on Vimeo.

I’d been kindly invited to a special preview of the film with the crew who put it together. In a small screening room at Dolby in London, we sat and watched the final cut. It was my first time seeing the film and the same was true for some of the crew who’d each worked on individual elements, from filming and editing, to digging through archive footage or creating props for some of the recreated scenes. It was a pleasure to be among them.

You might be expecting the film to concentrate on those famous final footsteps, and the emotion surrounding them, but in fact it’s only as the credits roll that you hear Cernan’s last words on the lunar surface “we leave as we came and, God willing, as we shall return, with peace and hope for all mankind. God speed the crew of Apollo 17”.

This film is much more about what led to that moment, as told in Cernan’s own words, archive footage and by the people who were with him as his journey unfolded. It’s done with sensitivity – without shying away from some of the hard truths like the loss of Elliott See and Charles Bassett, the original crew for Gemini 9 who died in a T-38 jet crash just months before their spaceflight. The archive footage of the charred remains of their plane being lifted onto a lorry is not something I’ll soon forget, and yet this awful event was accelerated Cernan’s first trip into space.

The beginning of the Apollo programme was not without tragedy either. The film movingly shows the effect of the Apollo 1 fire that killed Grissom, White and Chaffee, had on their colleagues and loved ones personally, and on the space programme.

I defy anyone to watch Martha Chaffee talk about the loss of her husband without at least a lump in their throat if not a tear in their eye.

Cernan admits that he neglected his family duties in his narrow-minded pursuit of his astronaut dreams. It’s a bold statement, but openly admitting he was selfish is the first step in trying to make things right, to be the family-man that he didn’t previously have time to be. It’s quite heart-warming to see that.

Even Moonwalkers have faults and it’s good that he was able to recognise and admit to his, even if it had cost him a marriage by then.

This is a real human story and that is important. It’s not just about the glitz and the glamour and the almost untouchable superhero status of the Apollo astronauts, it’s real, and that’s what makes this film for me.

Possibly one of the most revealing, and touching, moments for me, was just a small, non-fanfared scene in the film when Gene Cernan is back at Kennedy Space Centre (KSC). His voice catches as he says that it’s all so different now and that he wished had hadn’t come back that day.

Having watched KSC change after the shuttle programme, and having friends who’ve seen their facilities stripped bare and demolished, it really struck a chord with me. That was a very real emotion from him.

Things were about to get even more “real” – positively incredible – when moments after the credits rolled, the man himself, Gene Cernan entered the theatre to say a few words. 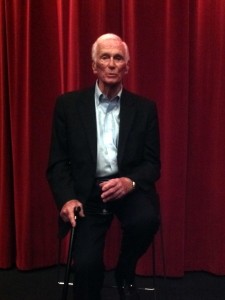 “You created my legacy” he says, thanking the crew for all their hard work and professionalism “I can’t keep going round waving a flag and saying ‘look what I did’”.

Having been initially sceptical of the idea that there could be an entire film about him, director Mark Craig and his team have won him round, showing that it’s his story, not just those final footsteps on the Moon that make this special. “I’ve been extremely lucky” says Cernan, “maybe the luckiest guy in the world”. With a seat directly in front of his stool, I’m feeling pretty lucky myself.

“Final steps of Apollo, not Last Man on the Moon, that’s probably what the title should be” he says. “It’s the path ahead that counts”.

He talks about the archive footage in the film, giving special praise to the person that sourced it – a young chap named Steve (Stephen Slater) stands up and gets a ripple of applause – “it opened up a whole new world to me” says Cernan.

The striking footage of the T-38 that crashed with his friends aboard, Cernan had never seen before the film. “So much that I missed even though I was there” he says. He’d been flying just behind them that day “they wouldn’t tell us [what happened] until after we landed” he said.

Of the Moon he says that it is “technically, philosophically and spiritually different”.

“You’re trying to understand where you are at that moment in time and space.”

The astronauts didn’t sleep very well on the Moon, even though the flight surgeon told him that the two things they needed to survive were rest and water. “How can you go all the way to the Moon, only be there for three days, and waste time sleeping?” he asks (quite reasonably), “but we had to”.

As if sleeping wasn’t going to be tough enough, they were in daylight all the time. “The only way we could make it dark was with shades, but had to pull the shades up to see where we were – the flag was there” he says, adding  he “needed to know that this moment was really happening”.

They slept well on the way home he says, “we only had one thing left to worry about and that’s whether the parachutes are going to open”. 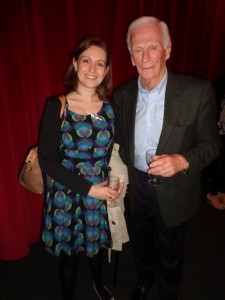 As he talks about having to make sure those moments on the Moon were really happening, I find myself in a similar position. Only twelve people have ever walked on the Moon, only eight of them are still alive, and yet here’s one of them – one of only three people to have been to the Moon twice – sitting in front of me. I realise I’m incredibly lucky, but I also pleased to see that this film has captured his story so well that many more people will get to share it, even if not in person like we did.

Before we retire for drinks, Cernan’s step-daughter Danielle is keen to say something. “I’m watching this as a mother and as a daughter – it really is a story that you all have captured so beautifully” she says. “He might not express that, but there are so many moments at home, there have been tears. We are all so grateful, you have done a great job”.

If that’s not praise, I don’t know what is.

There’s probably not much I can say to follow that, other than to add that this is a really intelligently made film, which takes a story that was always going to be of interest to me, and still surprises me with its craftsmanship, tender moments, and attention to detail. If you get the chance, space fan or not, go and see it.

Last Man on the Moon is a documentary film from Mark Stewart Productions. It’s currently doing the rounds of film festivals (do catch it if you can) and it is hoped that a distributor will pick it up for general release. I managed to catch Gene Cernan during the reception and recorded this short interview with him: