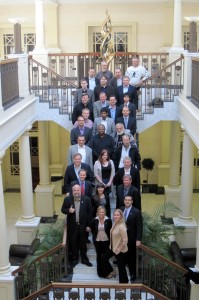 Slightly delayed reportage from the GLXP summit, thanks to other work commitments and severe tonsillitis. representatives from 13 of the 23 currently registered teams were on the Isle of Man to discuss their progress and share ideas and enthusiasm. I wasn’t entirely sure what to expect from the summit, but whatever I half-expected, wasn’t quite the case.

I met some really interesting people from all over the world, but there were no actual robots on show and, perhaps because these guys (and yes, the group was almost entirely male) have been in it for a while whereas I’m fresh to this prize, there just didn’t seem to be quite the level of excitement that I thought there might be. I mean, forget all the technicalities and logistical obstacles that need to be overcome, these are people that are trying to SEND ROBOTS TO THE MOON. You don’t need a PhD in rocket science to see that that is inherently cool. Perhaps it is easier to see this basic picture if you don’t have your mind stuck on how exactly you’re going to solve the problem, I don’t know.

Anyway, if I had one comment to make, it’s that at least some of the teams are missing a trick in terms of getting people excited about what they are doing. Their excitement needs to sparkle through, genuinely, they have to believe in their dreams and bring people along for the ride. Palle Hastruup from team Euroluna had a sort of boyish excitement about him which was infectious – it’s a great story, and given the teams aren’t all likely to get to the moon, they could still achieve a huge amount by inspiring the next generation of lunar explorers.

That’s my tuppence worth. Invited or not. I explored this idea further with Michael Doornbos of Evadot.com when he kindly invited me to be a guest on his podcast. You can listen to it here.

Once I was back from the Space Isle (there’s still something quite comical about that) I set to work on a package for the BBC World Service programme Science in Action. You can listen to the episode here (about 16 minutes in).

Posted in Audio Events
No Comments Yet Posted by SpaceKate