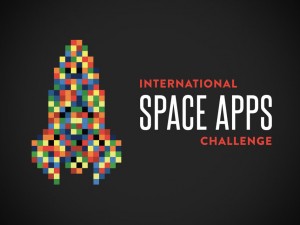 It was the biggest hackathon in the world apparently. 83 different locations around the globe hosting space fans, coders, designers and more as we tackled a range of pre-set challenges. Well, that’s what most people did, but when I signed up to attend the London event I didn’t realise that they’d give us challenges, so I set about coming up with an idea to bring with me. I’m not a coder, but I am a fan of space, so I wanted to be able to bring something to whichever team I ended up working with.

After Maj Tim Peake spoke at the British Interplanetary Society, I spoke to him a bit more about his NEEMO mission. Working in specially designed underwater habitat he spent some time testing out iPad apps that might be of use to astronauts in space. I discovered that there were some fairly simple tasks that still hadn’t been optimised in space, and when your time is accounted for minute by minute, saving that time is a pretty big deal.

With Commander Chris Hadfield sending down daily photos of the planet to great acclaim on Earth, I wondered if there was something that could be done to optimise this process. That’s where the idea behind T-10 was born.

I checked with Chris whether it might genuinely be of use and he seemed to think so. Now I just had to work out how to make it a reality.

The first step on the journey took place not in London, but in Rovaniemi in Finnish Lapland. I’d accepted an invitation from ESA to go and see aurora with some spacetweeps. Escaping temperatures of -15C, a few of us had lunch in a Mexican restaurant. The bizarre surroundings were not lost on us, and as I chatted to fellow space enthusiast João Neves about his dream of working in space, I told him the adventure started there. “Remember this moment, sitting in the Arctic circle, easting burritos, this is where it begins” I said, half jokingly. I think it is important to follow your dreams, and sometimes you need a little push to do so. I decided that I would do what I could to put João in touch with the sort of people that might make his dream a reality and encourage him to look out for space jobs.

Back in London, I signed up for the Space Apps Challenge, and then it dawned on me. I would need someone like João to make my idea into reality. I emailed and said that if he wanted to come and work on a cool project, I would give him a place to stay.

NASA’s Chris Gerty would be at the London event I discovered. What a treat, I’d met him before while chasing rockets and doing stories on NASA. In fact, it was down to burritos that we had met. I chatted to him in the queue at Firebirds burritos in Houston because he had a NASA sticker on his laptop.

As the event began, people gathered in teams around the suggested projects. I sent out a tweet to see if anyone fancied joining João and I on our quest to get an app to space. That’s when Ketan Majmudar got in touch. We’d met at the BBC some time ago when we went to see Bill Thompson’s radio show BBC Click being recorded. Small world.

We got down to work, with João looking at the data, and Ket planning the app and me scribbling notes on post-its and temporary whiteboard sheets. It was real. We were doing it. What’s more, we were all excited.

As the guys got on with some technical wrangling, I dashed around, excited. It was around this point that Dario Lofish arrived. I overheard him saying to one of the organisers that he’d just got there. “Join our team!” I said, excitedly, before speedily talking him through several ideas at once. He came over and said hello, then we said he should take a look around in case something else took his fancy, rather than just succumb to my ambush like that. I secretly hoped that he would come back to us though. As a designer he would bring an extra skillset to our team, and anyway, it’s always nice to have someone else to talk to when the others were doing the hard coding.

We talked through the app structure, designed the rough layout of the screens and reported back to Ket and João. Things were really coming together. It was super exciting.

We had dinner, we had a beer, and then we found out that what we had thought was the deadline to present our work was actually the deadline for us to leave the space. Uh-oh. It would be a late night.

João and I got the nightbus home and Dario heroically promised that we’d have a presentation ready for the next day. Arriving the next morning we were all tired, but hyped. Dario’s slides were amazing, Ket and João had created a prototype of the app. Suddenly my mad idea was a real programme on an iPad. I was set to present to the group. I really didn’t want to let the guys down. Their incredible work on T-10 deserved to be recognised. I was shaking slightly, it was down to me to convince everyone else that our app deserved to win.

Wearing my lion slippers, I leapt about on stage, extolling the virtues of the app, and trying to engage the audience with the product. Ket showed off what we had already coded and then there was nothing left to do but wait as the other teams showed off their fantastic work and ideas. From mapping the dark side of the moon, to a social network based around keeping chickens, cubesats to space holder images for website development, there was an amazing range of stuff. 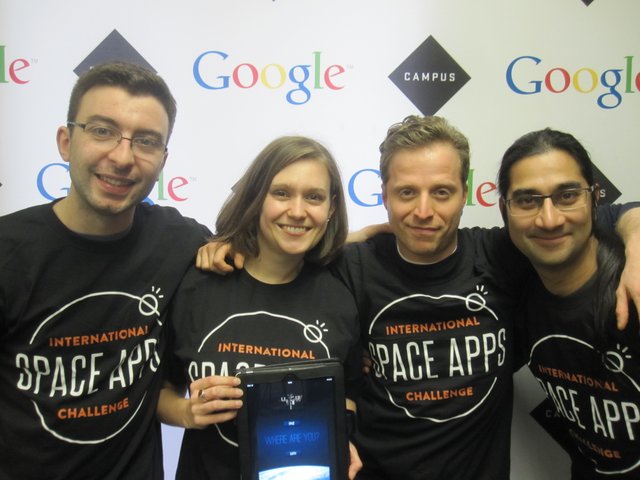 Grabbing for the Red Bull to keep us going, we waited for the judge’s verdict. First, honourable mentions, then, the ones that would go through to the international judging stage. As I heard the words “T-10” called out I couldn’t believe it. We won? We WON! Oh me oh my. I already felt like a winner with the team I had around me, and what we’d achieved, but we’d actually won. Had we? I had to ask. The team sitting behind us, “People of the Soil” had also won and were in equal disbelief. I checked whether it could be true, but yes, we had, we really had won. The next stage began now. Well, after a celebratory drink at least. To the pub to celebrate! Wowweeee!

Posted in Events
Comments Off Posted by SpaceKate