Tim Peake – the politics and the possibilities

It was just a few months ago that I wrote about Maj Timothy Peake after he spoke at the British Interplanetary Society. I had asked him at the time whether there had been any push-back from his colleagues at ESA on the basis that the UK hadn’t ever funded human spaceflight at the point he was selected. While he said that he’d not experienced any ill feeling from the people he worked with, it was agreed that the ultimate test would be flight assignment.

As I write now, I’m delighted to say that Tim Peake has been assigned a long-duration mission to the ISS in 2015. This is something of a turn up for the books, since it was originally rumoured that (if anything) he might be offered a short flight to the station.

But now that’s all changed. Could this have something to do with the fact that the UK put in a wad of extra money to ESA at the ministerial council in November 2012? Did our £16 million (“one-off”) pledge to the project that will see Europe helping out with NASA’s Orion module bump our Tim up the list? Who could possibly say for sure, though I’ve heard that David Willets “knows what he wants, and how to get it”.

NB: I’m in no way suggesting that Peake isn’t a superb candidate, eminently qualified and ready to take on the challenge. But decisions don’t always get made on simple merit in this world, and there was a nagging fear that he might end up being a victim of politics and Britain’s formerly standoffish attitude to putting people in space.

Be it Willets’s negotiation skills, or Peake’s prowess in ground-training, it’s excellent news.

That said, I still have some concern about the level of politics that could come into play around his mission. The Prime Minister’s team were quick off the mark to publish a photo of David Cameron showing the blue-suited Peake up the stairs of Number 10 – almost too eager to claim him as a UK success, despite the fact it’s European-, not UK, Space Agency funds that paid for his selection and training. 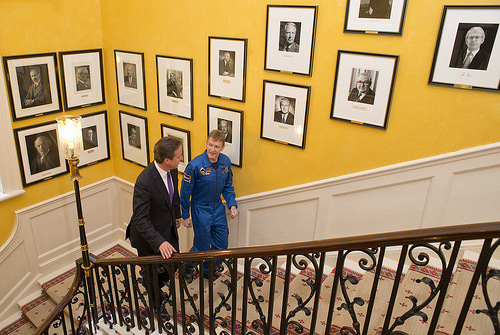 The UK is very particular about the way it approaches space. It appears to be a purely business venture, with hard cash leading the way, as opposed to a desire to inspire a new generation or support emerging scientific opportunities like biomedicine. With Peake’s assignment to fly, and the UK’s recent signing up to ESA’s European Life and Physical Sciences in Space Programme (ELIPS), could that be about to change?

I have my doubts actually. Satellites and telecommunications. We excel in these areas and they bring home the bacon. Space is seen as ‘just another industry’.

But where is the magic in that? Where is the inspirational value that could coax a wave of young people to follow science, technology, engineering, and maths careers? Where is the UK’s place on the cutting edge of new discoveries in space?

Will Tim Peake be our poster boy while he’s up there and then fall off the face of the Earth when he’s back? Will the UK feel a surge of pride and excitement as we did with the Olympics, but then go back to life as normal when his mission is over? How can we ensure that we use this opportunity to a new generation and convince the government that there is more to space than big businesses making money? These are all questions that we need to think about, and plan for.

I’m aware that 2015 happens to be an election year. Another coincidence? Or could there be some political hopes pinned to the feel-good feeling that Peake will bring to the country? 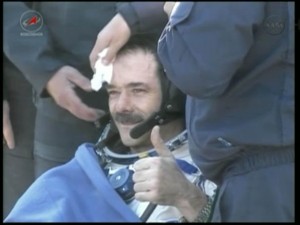 We’re all abuzz with the amazing job that Chris Hadfield did in space, making it real for people, sharing his adventure in space with us. Do we risk putting too much pressure on Peake to replicate this? Whilst Hadfield sang of Major Tom, we’ve got our very own Major Tim, so how do we best support him on this adventure? We have to remember, after all, that Hadfield is a seasoned space-flier, while for Tim this is an entirely new adventure.

I’d like to start coming up with ideas now, ideas that will last beyond his flight, so that we don’t lose the opportunity of putting the UK on human spaceflight map. So that we make the most of his time in space to inspire as many people as possible. Ideas of how to link into schools and education and researcher challenges. Ideas of how best to share his stories. Ideas of how to show those on high that there is more to life that telecommunications, and not only should the UK be part that, but we need to be.

4 Responses to "Tim Peake – the politics and the possibilities"