This morning I’m full of conflicting emotions. So excited -so excited – that ESA managed to pull off the incredible feat of landing Philae on comet 67P, but also sad. I’m sad, truly disappointed, upset about that shirt.

The shirt I’m referring to of course, is that worn by Rosetta lead project scientist Matt Taylor during the coverage of this historic landing. He took it off at some point, either waking up to the fact it was hugely offensive to many people, or because he was advised to by someone in the press team, but the damage was already done. 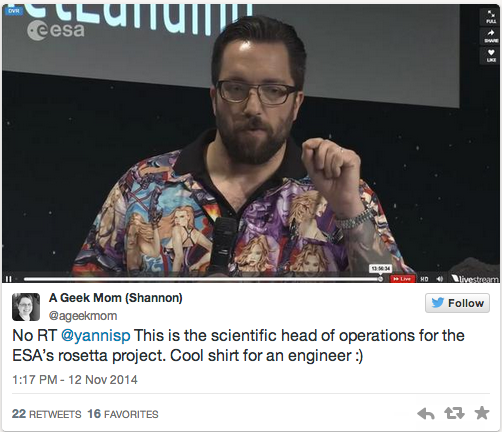 Following the landing on Twitter, with friends all round the world, I didn’t want to be distracted from the mission. When I first saw tweets and small auto-loaded images that mentioned the shirt, I thought they were referring to it’s garish colours. It was certainly um, “eye-catching”. But then I looked closer, and saw it was covered in images of semi-naked women. Er, what? My first thought was that it should never have been made, let alone bought, let alone worn – never mind the fact the eyes of the world were on this coverage.

At work, and only able to sneak glimpses of the landing coverage via Twitter, I didn’t think too much about it. I sort of figured this was some quirky scientist attempting to have their moment of fame by emulating Curiosity landing’s “Mohawk guy”, wearing something bright so they could be picked out in a crowd.

It was only later that I realised this wasn’t just anyone, this was one of the lead scientists of the mission – one of “the faces and voices” of the mission. Ah, this is the guy who had the landing tattooed on his leg, before it happened, so confident (or hopeful) that it would happen. I thought that was cool. It showed real passion and dedication and love of his work. Showing that scientists aren’t just the stereotype of old, serious, white male in a lab coat.

So what went wrong? How could this happen?

I’m going to give Matt Taylor the benefit of the doubt. Let’s say he just didn’t think about his choice of shirt in that way and didn’t realise that it might upset people. Let’s just imagine he wanted something bright and “non-lab coat”. Let’s imagine that he wanted to do something positive by wearing something bright and showing that science can be fun.

My question is how could anyone at ESA have allowed him to wear it on screen? I know they were all busy, so busy, I know they had other things on their mind, I know you might think “get over it Kate, it’s just a shirt”, but this has really bothered me. Here we are, making history, making great leaps forward, and yet the historical record will show just how backward we were. Here was a chance, with the whole world watching, to show a new generation of potential scientists that this stuff is cool, it’s exciting, and it’s for them – and yet with one bad clothing choice we’ve potentially alienated half the audience.

I’m cross. I’ve campaigned previously to keep sexism out of space. These things might seem small, but the effect is toxic. I’m sad. So sad, that at this great moment, this never-to-be-repeated galactic first, that no-one stepped in and said “mate, what are you thinking, take that off!”.

I’m sad that no member of the press and PR team, no member of management, no team member or journalist said “take that off before you represent the leading edge of human achievement”.

There was some uproar on Twitter, but actually this wasn’t just a “Twitterstorm” for the sake of it – in fact I was really impressed at the way Erin Ryan gave it a more positive angle by highlighting some of the female scientists and engineers that were part of the team, noting for each of them that #shedeservesbetter.

The shirt disappeared later in the day, but by then press interviews had been done, and as I watched the BBC Ten o’clock News, there it was again. That shirt.

It might not have been quite such a big problem if it was confined to the live coverage on the ESA stream – lots of people were watching, yes, and lots of them could feel disappointed by it, sure, but the fact it made it into the mainstream media coverage, that’s a really big problem. Now we have many thousands of people, the audiences that space and science might not always reach, exactly the sort of people we need to excite – and this is the glimpse they get of the space family.

I’m sad that the journalists interviewing him didn’t stop and suggest he take the shirt off, point out that it might detract from his message about great science. I’m just so sad that this could happen.

Since I started writing this post I know there have been several others posting on the topic, I saw Matt Taylor on the front of the Evening Standard yesterday with an interview from his family saying that he is super smart but can lack common sense (I didn’t see a reference to the shirt) and I’ve even seen horrible abuse aimed at people on Twitter who (rightly) called him out on it.

I’ve been asked whether my love of space exploration trumps the issue of objectifying women. My answer is a clear no. They are different things. Yes, I’m totally thrilled that we landed on a comet and we did that no matter what people were wearing, but do I think the coverage has been marred by “shirtgate”? Yes. Without a doubt. Here was the most fantastic opportunity to show that space is for everyone, and yet that stupid shirt sent out an entirely different message, consciously or not.

In fact maybe that is the issue here, that we’re so used to this sort of thing that it doesn’t register with people as being sexist or damaging. Well we shouldn’t be, and we certainly shouldn’t be raising the next generation to just accept it either.

I’m sad that I’m writing this post and not just raving about the super coolness of landing on a comet, but you know I think that’s amazing, and I know that story is being told elsewhere, so I think it’s important that I add my voice to the others, in expressing my disappointment at this – at best a missed opportunity, at worst a damaging step backwards.

I know people working in media at ESA. They are good people. They work hard. They probably realise that this is an issue too. This is not about blaming anyone, but making the point that this wasn’t okay. We simultaneously took one giant leap for humankind, and one giant leap backwards.

So what now? I would like to hear from Matt Taylor – to find out what he really thinks. An apology and a strong statement that gives the women on the Rosetta team the respect that they deserve. As for ESA? A concerted effort to highlight all the great and inclusive things that they do – all the brilliant women that made this mission possible – and all the opportunities for the next generation of female engineers and scientists to be part of this incredible international partnership.

Matt Taylor made a heartfelt apology for the offence he caused during an ESA hangout today where scientists were updating us about the status of Philae. It was genuine and I thank him for it. I still question why those around him didn’t do something which could have avoided this situation, but I’m confident that a lesson has been learnt and people will be more careful in future. It is important that we learn from mistakes, and acknowledging it was a mistake is a good first step. Thank you Matt. Now let’s get back to rooting for Philae and hoping there’s enough power for the next communication window later tonight.

I do moderate comments on my blog, to stop spam, but I’ve approved all the comments that have come in today, precisely because they illustrate some of the issues that we face. It’s not about men vs women, it’s about the level of vitriol in comments on what I had hoped was quite a balanced post. It’s like people haven’t read what I actually said, or just prefer to attack rather than think about whether there might really be a problem.  Perhaps it’s easier to attack rather than calmly engage, and therein lies a problem. It shows there is still work to be done, and although I don’t expect my voice alone will make a difference, I hope it will help other realise that it is okay to speak out about things that matter to them. It’s the only way things will ever change.