So I’ve been dreaming about getting into space, and I’m merrily living my life as a Space Nomad, chasing space stuff around the United States, but despite all this, I’ve never actually seen a rocket launch. Until yesterday.

SpaceX managed to do what NASA couldn’t – launch a rocket while I was in town to see it – and what a historic launch to see. Their Falcon 9 rocket flew only its second flight, but this time with a fully functioning Dragon capsule, which they wanted to put into orbit and then recover. This is the first time that any commercial company has attempted to recover something from orbit, so it’s a pretty big deal – especially as it all seems to have gone extraordinarily well.

SpaceX – founded by Elon Musk (ex PayPal) – aim to provide affordable transport into orbit, be that cargo or eventually people. Unlike Virgin Galactic, they are not after the tourist buck, but are more interested in providing services to space agencies such as NASA. In fact, they have already got a contract for (at least) 12 resupply missions to the International Space Station (ISS) under the CRS (Commercial Resupply Services) and COTS programme (Commercial Orbital Transport Services). The other company NASA has contracted like this is Orbital Sciences.

There are only two confirmed shuttle missions left before the vehicle is finally decommissioned, with potential for a third dependent on funding decisions. Once the shuttle programme is over, the US will be reliant on the Russians and their Soyuz vehicle to transport astronauts back and forth from the ISS. Russia, Japan and the European Space Agency (ESA) have all sent resupply ships to the ISS alongside the shuttle, but retirement of the shuttle will leave a gap that needs to be filled. SpaceX are hoping that their Dragon capsule can be used as a resupply vehicle in place of the shuttle and yesterday’s successful launch is a big step towards that. Their next mission is due to test the Dragon’s ability to approach the ISS, and it is hoped that they will manage at least one docking with the ISS next year. 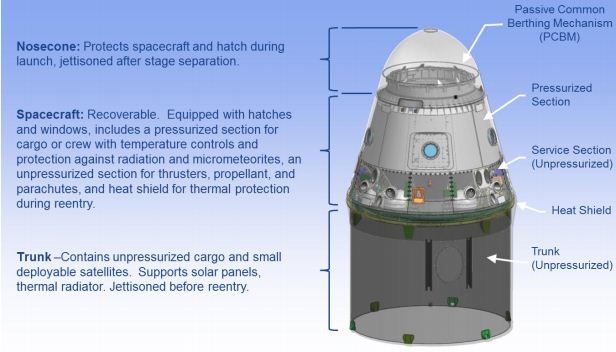 Things are changing for NASA. The end of the shuttle programme will see many people laid off of choosing to retire. Their budget is yet to be confirmed, but at least part of it is earmarked for use as incentives for the commercial space sector. These are exciting times to be part of the commercial space industry, a new space race has begun.

So, back to the launch. SpaceX had three key milestones that it wanted to reach: Launch, Separation and Re-entry. The first launch, at 9.06am was aborted due to a software issue, but at 10.43am the Falcon 9 successfully launched from space launch complex 40 at Cape Canaveral. According to SpaceX’s press briefing, of the world’s current launch vehicle families, 75% have had at least one failure in the first three flights. Falcon 9 has now launched twice and managed to do so successfully both times.

Falcon 9 is a two-stage rocket, with the first stage designed to be fully reusable once recovered from the ocean (they use the same boat that NASA uses to recover their SRB tanks). Three minutes after lift-off, the first stage separates from the rocket and falls back down to Earth. Six-and-a-half minutes later the Dragon separates from the second stage rocket and just 13 minutes after lift-off, the Dragon capsule is able to begin on-orbit operations. It’s 300km above the Earth and travelling at speeds of over 17,000 mph in order to stay in orbit. This all went smoothly, so it was just re-entry that they had to worry about next.

The Dragon flew just less than two orbits around the Earth, taking around 90 minutes each to complete (just like the ISS) before splashing down into the Pacific ocean, about 500 miles west of the coast of Mexico. In order to leave orbit, the Dragon must complete a “de-orbit burn”. This is what sets the capsule’s course back down to Earth. It may sound simple, but take a moment to realise that at the point the engines fire, the capsule itself is on completely the other side of the world to where it is due to land. If this manoeuvre is to great or too small, the capsule will entirely over- or under-shoot its targeted landing spot. The de-orbit burn lasts for just six minutes and is the key to success or failure of the Dragon re-entry.

With that fresh in your mind, I can tell you that not only did the Dragon achieve re-entry, all the parachutes (designed to slow it down before it hits the water) deployed correctly, but when the capsule finally splashed down, it was less than a kilometre away from the target site. This is pretty amazing, to say the least.

The entire mission lasted just less than three and a half hours and appears to have been near flawless. It was a great day for SpaceX and commercial space flight in general.

So you’re wondering, when are they going to start taking passengers? Well that’s a whole different kettle of fish. At present, there is no formal process for vehicles to become “man rated”, because it’s only been government agencies that have been able to fly people into space. As I understand it there are discussions taking place to come up with a way of certifying commercial vehicles for spaceflight, but even this is jumping the gun. The Falcon 9 has only flown twice, the functional Dragon capsule has only flown once. We are a long way from sending astronauts into orbit on these vehicles. I’ve spoken to various people – astronauts, NASA employees, Dept of Defense staff – and the most optimistic any of them have been is that America will be able to send humans into space in not less than seven years. Others are a lot more conservative in their estimates. It looks like the Russians have the upper hand on that for the moment then. It’s interesting to reflect that the speed of progress during the original space race came from the animosity between America and Russia and now, they not only work together in space, but the Americans are reliant on Russia to transport their astronauts safely up there.

There are so many fascinating things about this whole space story – and I’m only just beginning to learn them. Do get in touch if you’ve a story to tell, I can’t get enough of the first hand accounts of working in this industry.

Speaking of first hand accounts – I saw my first ever rocket launch yesterday. This is what the experience was like for me:

After experiencing so many shuttle launch delays and scrubs for the launch of STS-133 – Discovery’s last flight, I wasn’t really expecting to see a rocket launch. We walked along a little pier at the KARS park, over the water from the launchpads and squinted until we could make out the pad to focus our cameras on. The excitement grew as the countdown neared zero, but then we heard that dreaded word again “Scrub!”.

No matter, unlike the shuttle, the Falcon 9 had a large launch window. The next launch attempt was little over and hour and a half away (compare the days, weeks, months I’ve been waiting for Discovery!). It was chilly, so our impromptu SpaceX tweet-up (myself, @flyingjenny, @astrogerly and @natronics) removed ourselves back to the car to wait.

Back on the pier, I set up various pieces of tech to record the event. I’ve left it a bit late this time, and as the wind blows my camera of the rail I hurriedly reset them on the floor. Of course by now I’m panicking I’ll miss the whole thing, so I press when I think are the right buttons and then get set with my camera. “I see smoke” says Nathan – sure enough, a plume of thick white smoke is emanating from the base of the rocket – now aglow as proof of ignition. The Falcon 9 gracefully, somewhat slowly in my mind, lifts away from the pad, shining brightly in contrast the the thick what smoke bellowing from beneath. “Ah yeah” says Tiffany, as my phone beeps with someone helpfully letting me know that the rocket has just launched. We snap away with our cameras, and I pause to watch with my own eyes. 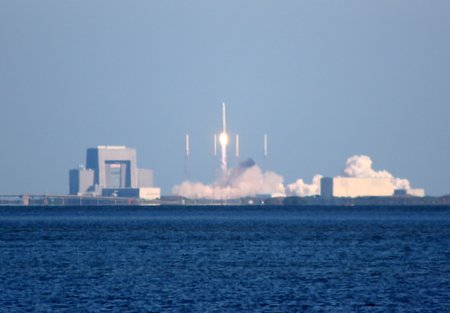 Something about the experence feels unreal, and then I put my finger on it. The silence. Shutters click, and birds play in the water, but other than that it’s quiet. I work in radio, silence makes me panic. It means that something is wrong, you’ve gone off air, lost a vital connection to a guest. In the same way, my brain couldn’t quite compute this silence. There I am, watching an enormous rocket blast off, and yet, that’s just it – there is no “blast”. Of course I understand the concept of the speed of light versus the speed of sound, I know that the sound will join us at some point, but for what seems like an age, there is silence. 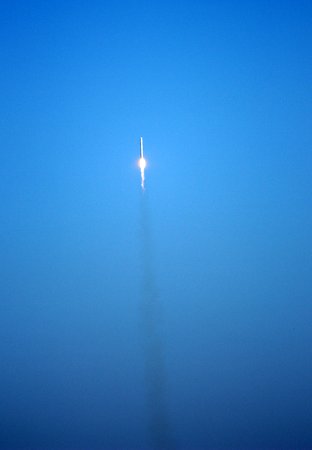 The Falcon 9 appears to have gained speed – I track it through the sky as a vapour trail appears, blown this way and that by the winds it forms a merry zig-zag – almost a cork-screw effect in the sky. 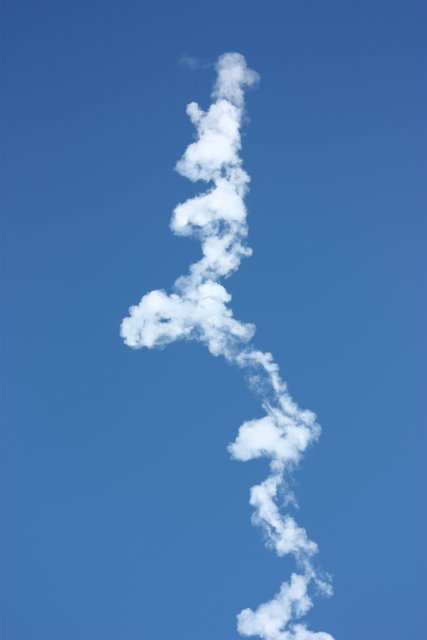 And then the sound. It finally reaches us, more than 45 seconds after the launch, I hear the deep low rumble and almost feel the vibrations from this mighty beast. But by now, the Falcon 9 is fast becoming a mere speck of brightness high high up above us.

There’s a feint pattern as the rocket pushes on through the upper layers of atmosphere. You can almost feel it barging its way through the air. And then it’s gone. 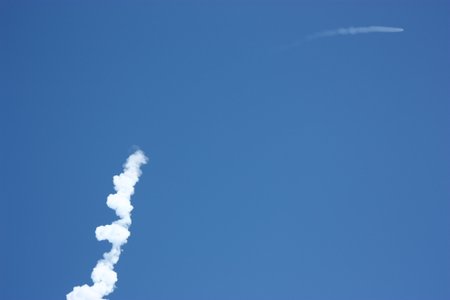 I realise I’ve failed to set either of my small cameras to record the lift off, but I did record some sound. You’ll probably need to turn your speakers up (or listen through headphones) to get the effect. It really is a long while before you’ll hear the rumble, but I thought I’d include the moment of launch up until the sound hit us, so you can get an idea of what I’m talking about. Fantastic. My first rocket launch.

listen to ‘#SpaceX Falcon 9 launch Wait for it, wait for it, that’s the sound of a rocket launch!’ on Audioboo