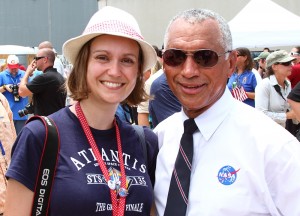 This afternoon something very strange happened. I received a tweet from @katrobinson that said “@SpaceKate Administrator Bolden is talking about you! #NASATweetup”.

My instant response? “ARE YOU SERIOUS?”

Apparently she was, as this tweet was rapidly followed by several others from people who were also at the Juno TweetUp.

Whoah! The Head. Of NASA. Was talking. About ME! Have you any idea how totally and utterly improbable that is? How completely unthinkable it would have been just a year ago? How mad it is that a former astronaut, the administrator of the world’s most iconicly famous space agency , would be talking about me, a girl who grew up (and still lives) in the East end of London? If you even jokingly suggested it a year ago I would have laughed and cried “impossible”.

The past year has been an unbelievably special adventure. I’ve made friends with astronauts, mission controllers, scientists, engineers, and shuttle programme workers who’ve shown me the real NASA. The human, real, hard-working, passionate, family that is NASA. I’ve seen two shuttles launch and land and been bear-hugged by the boss. I’ve watched SpaceX launch their dragon capsule into orbit. Flown the shuttle simulator. Been awestruck by the sheer scale of the VAB. Waved at the ISS to someone I’ve eaten dinner with, and then mourned for him when his mother died and he was still in orbit. I’ve learned and I’ve shared. I’ve chatted at length about space at airports and given my NASA swag to excited young children. I convinced someone to fly transatlantic to see Discovery (finally) launch. I even got the cynics in my office watching the final shuttle launch when I wasn’t there to demand they did so in person.

There are too many highlights; too many moments I’ve needed someone to pinch me. Today is one of those days. Today the head of NASA used me as an example of being passionate about the space programme. I cannot quite explain what that means to me. It’s been such an honour to do the things I’ve done and I just hope that my thrill and excitement and attempts to bring people along the journey have shown that I realise how lucky I am.

Today the head of NASA talked about me. I guess I must have done something right.

(When my blog was lost – April 2012 – I feared I may have lost the most precious comment on this whole blog – from Charlie Bolden himself. Thankfully some clever internet caching means I can paste the comments below – not perfect, but better than being lost forever)

Posted in SpaceNomad TweetUp
No Comments Yet Posted by SpaceKate