I love the Science Museum in London. I always have, whether it was because it had lots of buttons to press as a child, because I learned they house Watson and Crick’s original model of the DNA double helix when I was thinking of studying genetics, or because they have adults-only evenings with interesting talks. I love it. 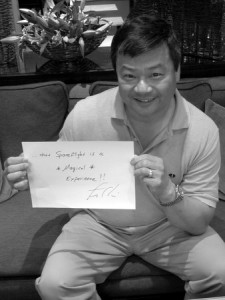 Of course it was the first place I thought to go to learn about space before I had my first meeting with astronaut Leroy Chiao. A year ago I knew Apollo 11 went to the moon and that Apollo 13 was a film I hadn’t seen, about astronauts in trouble. I needed to know more than that before I sat down for lunch with an astronaut. (An astronaut!!!)

I trawled a wikipedia page that introduced me to Mercury and Gemini. So much information. I needed to see things, be surrounded by them. I headed to the science museum. Like an eager schoolchild I entered the space gallery with my notepad and pen. I wanted to learn, to be educated, to be inspired.

I hate to say it, because I hold the Science Museum dearly close to my heart, but I was disappointed. There were boards telling kids that they could be astronauts, which I felt didn’t do justice to the gravity of all that entails. Why not encourage them to be engineers, rover drivers, software engineers.

Being an astronaut is cool, but not many people get to do it, and for a while at least, there aren’t going to be too many opportunities, not through traditional channels anyway. The display said that governments were all aiming for the moon, even back then I knew enough to know the that was no longer the case. NASA was in limbo, Constellation had just been axed, no-one knew quite what was coming next, but the moon wasn’t a prime target.

There were artifacts, but no overall feel for how they fitted into the story of space. There was a 1986 video of the shuttle, it looked embarrassingly dated. None of it felt sexy and spacey, and let’s not forget: Space IS Sexy.

I left having written down one date and the name of the first dog in space. Then I went home to read Wikipedia and panic about what exactly one should wear when meeting an astronaut.

Two weeks later I was back at the science museum to attend TEDx London. As I walked deep into the museum to the theatre I said an internal “hello” to the structure of DNA and then stopped in my tracks as I passed a thick wall and found an Apollo capsule. An ACTUAL been-in-space-and-come-back-again Apollo command module. Apollo 10 in fact.

Wow! A real Apollo capsule. I was excited, gleeful, inspired… 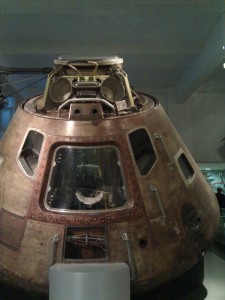 How the hell could I have come to the Science Museum, specifically to learn about space, read pretty much every single word on every sign in the gallery in order to try to absorb something and STILL miss that they have an Apollo capsule?!

I had a feeling that I had missed something, that my childhood self had seen more, but I looked around and there was no sign of there being anything more about space in the museum.

Today I attended Science Museum Lates, a space themed one, and I got to ask the space section curator, Doug Millard, “Why?”.

What a travesty! It’s the only flown Apollo capsule that is not in the United States. It’s a massive honour that London has this at all. It’s an incredible piece of history. Not just space history, ALL history. It should be the centre piece of any exhibition about space. Without a doubt.

If I had my way I would put the Apollo 10 capsule SLAP BANG in the middle of the space exhibition. It is by far the most exciting piece in the collection. Not only has it been in space, it has been AROUND THE MOON! How can they justify hiding something like that? It is the real deal. It should be celebrated not tucked away.

Then again, if I had my way, I’d be getting ready to go to space right now (or at least to see another shuttle launch!), and I know I can’t always have things my way. My compromise, if one really *has* to be made, would be to put a whopping big “REAL Apollo Capsule THIS WAY” sign in the middle of the carpet to a) alert people to the fact they have one in the museum collection, and b) tell them where the f&%k it is. (I’m sorry to get all CAPS LOCK on you, but I’m really passionate about this.)

Space is Sexy. New space is sexy and exciting. I don’t understand how it is possible to have an entire exhibition so focused on the past, with out of date labels giving the impression that space was something that used to happen, and yet still tell children they can all be astronauts. How? How can they be astronauts? 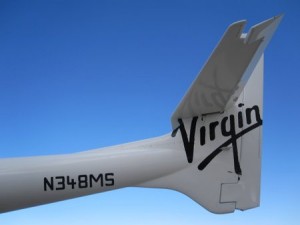 Well maybe now would be a good time to introduce the idea that space is becoming more commonplace. Draw parallels with the beginning of the aviation industry. Mention exciting things like the Ansari X-Prize,SpaceShipOne, Virgin Galactic. What about the Google Lunar X-Prize? People are trying to send ROBOTS to THE MOON! That’s awesome! What kid wouldn’t be excited about that? Especially if they were told they could even join some of the teams competing for this multi-million dollar prize.

What about commercial space? SpaceX‘s boss Elon Musk has announced they want to send people to MARS within the next two decades. They have engineers and programmers working their guts out right now to build the next generation of rockets. That is exciting. That is futuristic and cool. That is the future. That is what we should be using to inspire the next generation of scientists, mathematicians and engineers. The fact that real space stuff, is really happening, NOW. 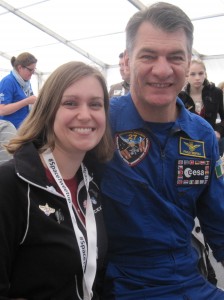 There must be more that can be done. The European Space Agency has an astronaut (the lovely Paolo Nespoli) in space right now, he’s on Twitter. Even just putting a screen up with a loop of photos he’s sent down from space, beside his tweets, that would be an amazing way to start making people realise this stuff is real. He’s up there right now. I wave at him when the ISS passes overhead. Things don’t need to cost a fortune.

Hell, I will loan the museum my space artifacts if it means that more people can enjoy them and be inspired by them. I have seen amazing things, I’ve been lucky enough to visit space centres and US aviation/space museums, I *know* there is more that can be done.

So I’m making my pledge right here, right now. I am going to do all that I can to improve the space section of the Science Museum in London. I will pull every string, of every contact, and go out and make more contacts if I need to, so that I can do all that I can to help. Who’s with me? Who can help?

Comments rescued from internet caches of the original version of this site, that was lost – cry!

Posted in Audio Opinion Review
No Comments Yet Posted by SpaceKate