The importance of outreach

I was chosen as one of the lucky few to be part of NASA’s STS-133 launch tweet-up, back in September last year. (You can hear the excitement in my voice when I found out.) So much has happened since then that I’ve really had little time to process it all and write it up.

Something that has been rattling around my head though, is the importance of NASA opening up its doors to the public. In the last few months I’ve heard complaints that not enough people are interested in space, that no-one cares about spaceflight any more, that people don’t understand how complicated it is to get a shuttle off the ground. These are the “space geeks”, the enthusiasts, struggling to share their excitement with a wider audience. It seems to me that the average American tax payer does not have the same childish excitement about NASA as we do in the UK. Perhaps that’s because we don’t have a human spaceflight programme of our own, perhaps it’s because we don’t pay for it with our taxes (although as a percentage of the US GDP it’s a tiny amount), or perhaps I just mix with the cool kids who are already excited about science and technology. Whatever the reason, if we want to inspire more children to follow careers in science, technology, maths and engineering, we have to reignite the public interest in space.

Space is cool. Space is sexy. Space is exciting. We must never forget that.

The next few years will be fascinating as commercial companies vie to be the first to put people in space and teams from around the world compete to put robots on the moon and win the Google Lunar X-Prize. But how much will these break through into the public consciousness?

One of the big problems with space (and indeed NASA) is that it seems so distant. I like to use the jovial analogy that like Father Christmas, you know he exists, but you’ll never actually meet him. I think that many people probably feel a bit like that about NASA. Only the best scientists work there, on the most complex problems, only the elite get selected to be astronauts – everything seems to be put on a pedestal. Everything is unreachable. If you can’t directly relate to something, (and it’s going to be years before an average person get to go into space themselves) then it’s easy to just discount it in your mind. How many times have you heard a news bulletin about a bomb in an Iraqi marketplace, thought “goodness how awful” and then continued eating your breakfast cereal and not given it another thought? It would be different it were the town next to yours, that’s for sure.

So the problem is how do you make NASA real? It’s got such a reputation and such a high brand value that you’ve got the difficulty of balancing new ideas with the fear of damaging the brand. Perhaps this caution is what has led to the detachment in the first place. The over officiousness of announcements and complex terminology hid the reality behind an endless list of acronyms. The reality being that space is cool, space is sexy, space is exciting.

How do you change the outlook of an iconic scientific institution to allow it to have a personal voice that people can relate to? I’ve got it on good authority that Twitter was not something that NASA management were very open to in the early days, but thankfully that has started to change. The NASA Tweet-Ups are really an incredible thing to be involved with. NASA is taking the plunge and trusting a group of strangers to come in, find out more about what NASA is doing, and tweet about it to their peers. This could of course go horribly wrong, so it’s a brave and bold step for them to have taken.

Why is it important?

Well it begins to make NASA more real. I know I keep saying that, and I’m not trying to suggest that NASA is a figment of your imagination, but it is important to make people relate to it. Once they’ve had a taste of it, they’ll likely share their experience with their friends and family, who may in turn get excited about NASA and talk about it with their friends.

Offering Tweet-Up participants exclusive access to NASA facilities, and taking the time to share information with them is an excellent way of creating brand ambassadors. 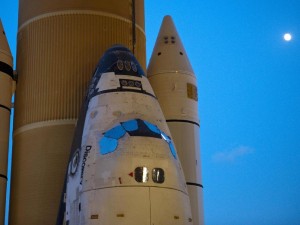 The way that the STS-133 Tweet-Up group got together before the launch was astounding. Within a few weeks of gaining our places, we had a Google group, Facebook group, and website, and had organised five shared houses in Florida to help ensure everyone could afford to go. Since then we’ve shared the ups and downs of a scrub and several more launch delays, but this has only served to strengthen our determination to see Discovery fly her last mission. I’ve learnt so much more than I ever would have done before by following updates about the mission status from NASA Tweet-Up colleagues and new space-tweeps I’ve met along the way. I’m excited to share what I’ve learnt, my photos, stories, audio recordings.. my poor Granny will have to listen to it all when I get back to the UK!

Now I’ve done a selection of social media work, and it is commonly thought that the holy grail is when you get people so engaged in what you’re doing, that they begin to engage others, even without your suggestion. By inviting people through its gates and explaining the work that they are doing, showing people iconic buildings and flight hardware, NASA is inspiring people to become brand ambassadors and spread their message for them. These tweet-up members will reach audiences that NASA wouldn’t normally reach and that’s another important step.

I applaud NASA for embracing social media, and I must give Stephanie Schierholz a special mention. She has worked tirelessly to pull strings to ensure that we get the chance to watch the shuttle launch from the press site despite the launch slip. I hope that it hasn’t been too much of a struggle for her. If the top brass at NASA could see how much it means to us all they would, if they had any sense at all, give Stephanie all the support and access that she needed. This launch is something that we will be blogging about, tweeting about, photographing, sharing, and telling anyone who’ll listen, about. That’s the sort of publicity and outreach that money can’t buy. If they had pulled the plug on it, they would have left a lot of people heartbroken, which is something brands should generally be careful to avoid. I really hope that they understand what this means to us all, and that the passion of the Tweet-Up group will encourage them to do yet more outreach in this vein.

In other areas there is more to be done. NASA need to ensure that they are consistent with their approach to social media. Whilst the Tweet-Up programme organisers are switched-on to the way of the web, it seems that other areas are not. A classic example of this recently was the debacle with the arsenic bacteria press release. Despite their headline being technically correct, it was mindblowingly obvious that it would cause a stir online. Theories abounded about NASA getting ready to announce a new life-form on Mars, and far from quelling the online speculation (which could have easily been done, by either NASA, or the journal Science, where the paper was published) they remained silent.

Sadly this resulted in a whole lot of nonsense appearing online before the embargo on the paper was lifted (early, since a UK newspaper had run with the story a day before). It was only on the morning of the press conference, shortly before the embargo was lifted (if I recall correctly) that anything was done to calm the online alien speculation, and that came in the form of a YouTube video from Science. When Ivan Oransky, author of the excellent “Embargo Watch” blog contacted NASA about the way the situation had played out the response from one of their senior public affairs officers was rude and condescending to bloggers.

NASA faces a challenge of keeping the media interested and reporting on the space programme. With newspapers in crisis and the reduction in specialist science journalists over the past few years they need to find a way to plug that gap. There is a strong network of space/science enthusiasts and professionals online who could be key. It’s great that NASA are plugging into that with things like NASA Tweet-Up and data sharing via the Open Gov initiative but they must also be careful not to bite the hand that feeds them. The obvious disdain for non-traditional media that was shown in the comments from the public affairs officer leave a nasty taste. You can’t have it both ways I’m afraid. You cannot embrace social media when it suits your own ends and then pour scorn on it when people have genuine questions, even if they are not what you want to hear. It’s all about honesty, integrity and openness, and it doesn’t take long for online communities to call out a fake.

On the one hand NASA, I salute you for reaching out and engaging with online communities, on the other hand, you’ve got a long way to go. Let’s hope you chose the right path.

1 Response to “The importance of outreach“