ATV3 Docking and the ATVTweetUp 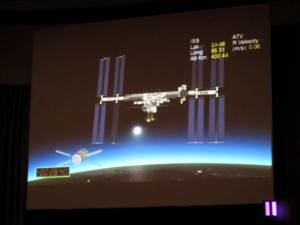 In a fantastic trip for my SpaceNomad alter-ego, I was part of the lucky group invited by ESA and CNES (the French space agency) to join them for the #ATVTweetUp in Toulouse.

After sunset, a deliciously French meal and making the acquaintance of some new space tweeps – including one from Poland! – we were treated to the lovely surprise of ESA astronaut Paolo Nespoli joining the ESA contingent for a quick hello. Anyone who knows me will know that I beamed as he called out “SpaceKate!” and greeted me. Daniel, Erica and Maria all joined us too and we sat outdoors in the warm evening air being entertained by an array of magic tricks from Paolo. 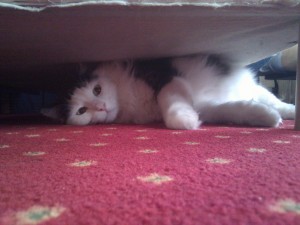 On the day of the TweetUp itself we were warned that the bus wouldn’t wait for stragglers, so there was a bit of a panic chez Kate and Jane since the hotel cat refused point blank to come out from under the bed. Thankfully the owner was around to help us remove the feline and we set out on our way, quickly spotting green ATVTweetUp shirts sporting ESA and CNES logos.

I said a quick hello to as many people as I could and instantly forgot names, but somehow vaguely remembered nationalities. What a lovely mixed bunch we had, with spacetweeps from France, UK, Ireland, Spain, Poland, Germany, Netherlands and even Japan! Kayoko Yamamoto made not only her first trip to a space tweetup, but also her first trip to Europe! That’s what I love about space fans, we’re a worldwide bunch and not afraid to travel for the chance to live new space adventures! I really hope that we made her feel welcome.

We arrived a CNES, were handed our very fetching ATVTweetUp t-shirts and yet another treat lay in store. Romain Charles, one of the Mars500 crew was also there with us and crewmate Diego Urbina arrived later. They tweeted away just like the rest of us and it was so nice to see them looking so fresh faced and excited. When I first met them in Rome they’d only just returned from their 520 day-long mission and were were being pulled in all directions to give presentations all over the place (including to us, poor things!).

We heard presentations from the top brass and learn about the 6.6 tonnes of cargo that ATV3 was carrying up to the station. From food, clothes, experiments and gifts, to water, gas and fuel for reboosting the ISS to ensure it remains in the correct orbit. Paolo Nespoli, looking smart in his blue suit, gave us the other side of the story. He was aboard the ISS when ATV2 arrived and he explained what it’s for the astronauts when this cargo ship arrives (they all rush to get a glimpse/take photos of it) and talked us through some of the docking process.

Here is a diagram showing the “S points” that Paolo mentions. These are different check points as the ATV approaches the ISS: 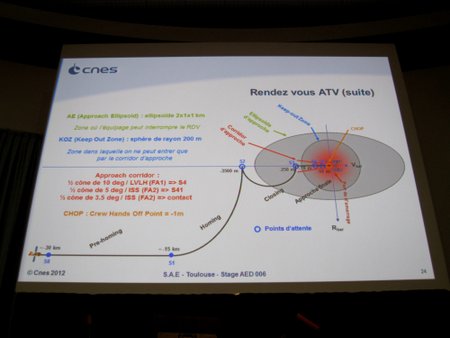 Toulouse is home to the ATV Control Centre (think Mission Control) where mission staff were avidly watching screens and monitoring the progress of ATV3 “Edoardo Amaldi” on its final approach towards the international space station (ISS). We were allowed a glimpse through the glass just an hour or two before final docking. I took a quick video so you can get an idea of the place. 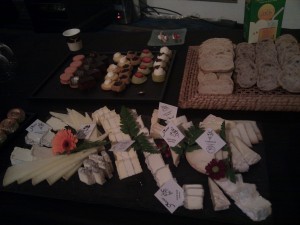 Back in our TweetUp room we made the most of the tasty pastries and a fine selection of cheeses, before embarking on a speed-dating format which allowed us to talk to different experts in a more intimate setting. This is an idea I’ve used successfully at radio conferences and it was nice to be able to be part of it, rather than being the one ringing the bell and trying to shuffle people on to the next table. I liked it, and heard some interesting stuff from Sylvain Michel about the beginnings of the ATV programme and then from a chap I didn’t catch the name of who was an expert in space debris (note to self – it’s interesting, write about it).

Then it was almost time for the big moment. They dimmed the lights, and put the live pictures up on the big screen. We sat waiting, watching, and listening to Paolo Nespoli’s informative commentary. Then there it was – a perfect docking. Once again the probe was so accurate it didn’t even touch the sides of the target cone and instead managed to centre in on a space these size of two Euro coins. Pretty amazing for an automated vehicle.

We supped champagne, clinked glasses and toasted the success of CNES and ESA and well as the people who made this tweet up possible. We are forever grateful. 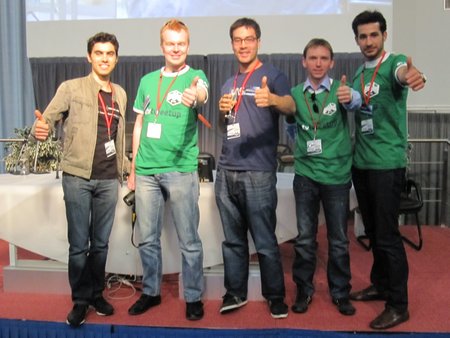 The after-dark ‘what happened next?’ story is a tale in itself, but involved some beer, some wine, some marsonauts, an angry hotel manager shouting “this is a hotel not a YMCA”, a nice French square, some crisps that looked like ‘Wotsits’ but were peanut flavoured, a live interview on BBC national radio, a stroll, a hotel bar, and then “is that the time, I better head to the airport for my flight”. I got to bed about 7am, so think I can claim to be a fully fledged member of the #sleeplessinToulouse gang, even though I never quite meant to be. It was all great fun though, and I’ve not smiled so much in a long time, so thank you all. Space is ace.

Posted in Events SpaceNomad TweetUp
No Comments Yet Posted by SpaceKate