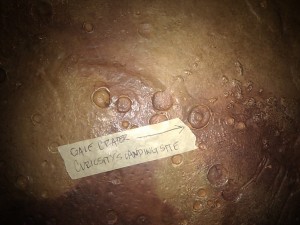 It was a somewhat cheeky email I sent, just lightly mentioning that I was hoping to be at JPL for the Mars Science Laboratory landing, but was in a pickle about what to do since I was travelling with a friend who couldn’t get media credentials. There was no guarantee that he and I would both be chosen for the MSL landing TweetUp, but I was “sure I’d sort something out”. Despite sending it to the Head of NASA (yes, really!), I wasn’t expecting an email by return from one of his staff requesting my address so that an invite could be sent out.

At the point I got the news, sitting in a lecture as part of the International Space University Space Studies Program 2012, I pretty much leapt out of my seat. Romain Charles, my road-trip buddy, was sat beside me, and had to endure me poking his arm until he finally relented and looked at my computer to see what the fuss was.

“Who is it from?” he asked. It’s from the office of Charlie Bolden, I excitedly replied. A lot of concentration went into not audibly squeaking for the rest of the lecture and I scrawled “OMG OMG OMG OMG!” on a piece of scrap paper.

Scrolling forward five weeks, I’m nervously walking into the Jet Propulsion Laboratory, clutching my priceless invite, hoping that the intricate series events that will see the Curiosity rover landing safely on Mars, do actually go according to plan. I wonder if there are managers asking themselves “why did we agree to this Skycrane? It’s crazy”. I’m excited, but nervous.

There’s a bustle of people, satellite trucks and cameras everywhere, visitors are ushered to their their designated viewing rooms according to the coloured stripe on their tags. I wonder where we’ll end up, and with who.

We find our place, a large auditorium that seats several hundred people, and yet still seems quite personal. I make the most of the cheese selection at the buffet and pick up a bottle of “Mars Water”. We’re really here, this is really happening, I can’t quite believe it.

Finally in our seats, I glance at the name badge of a fellow “VIP”. Bill Prady -*consults Google* – oh! Okay, he’s the executive producer of the Big Bang Theory. Nice. I drop him a shy hello via Twitter, and am told I should say hi. I certainly will, but now things are getting exciting. We’re getting closer to the “seven minutes of terror”. (If you’ve not seen the video about this, you must – and even if you have, here it is so you can watch it again!

The clock is showing time until landing, but after a moment of confusion I discover this is in fact time until we know that is has landed. They’ve already added in the 14 minute time delay due to the distance the signal has to travel from Mars. Blimey, it’s really close then – in fact by this point, MSL will just be entering the atmosphere of Mars. This is really happening, they’re really going to land an enormous rover on Mars, using 76 pyrotechnic devices, the biggest supersonic parachute ever, and a Skycrane. A SKYCRANE!

I’m expecting an incredibly tense seven minutes of silence, broken only by the occasional gasp as people realise it’s infeasible to hold your breath for quite so long, but I’m mistaken. We’re into the “seven minutes of terror”, but with so many different steps to ensure a safe landing, the tension is quickly broken as the supersonic parachute is deployed. We cheer, but quickly quieten again until the heat shield falls away. Another round of applause and then back to the tension, the parachute and backshell separate, and then the skycrane engine throttles to 100%. Whew. Back to the tension again, I’m suddenly very aware of the silence in the room. It had been so up and down before I almost hadn’t had time to take it in, or perhaps, for this last part of the landing, everyone really was clenching every muscle and holding their breath. It certainly felt like it.

The rover descends from the skycrane on cables, wheels released ready for touchdown, and we’re there! They did it! Skycrane flies off for a crash landing, we clap and cheer and automatically give a standing ovation. They did it! They bloody did it! It’s mad, but they did it! The screen shows images of mission controllers leaping out of their seats, hugging each other, smiling, cheering, crying with emotion. It’s so incredible to be there, even though I’m just watching on a screen, the emotion is flowing through into the room and the crowd I’m with.

There’s a brief pause and then news that they’ve got the first picture back already. Amazing. There’s a wheel. You can see the rover’s wheel, ON MARS. But wait, there’s another, it’s Curiosity’s own shadow, caught on camera. There’s an iconic photo if ever I saw one.

I’m utterly speechless. I look round and NASA astronaut and Head of Education, Leland Melvin is there, with Will.i.am. Bill Prady has got up to leave, so I take my chance and dash up to say hello. I ask for a photo and he replies “I always keep my friend Will Wheaton with me so he can take photos”. I ask if he’d join us, and his wife kindly did the honours: 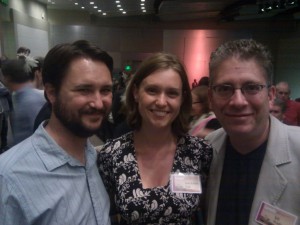 Full of the joys of Mars, I patiently await my turn to stand in front of those first two images from the red planet. Just incredible. What an absolute privilege to be there, sharing this moment with these people. Wow. 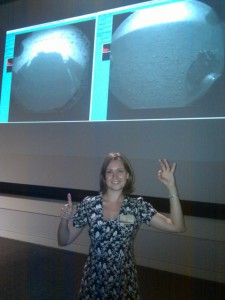