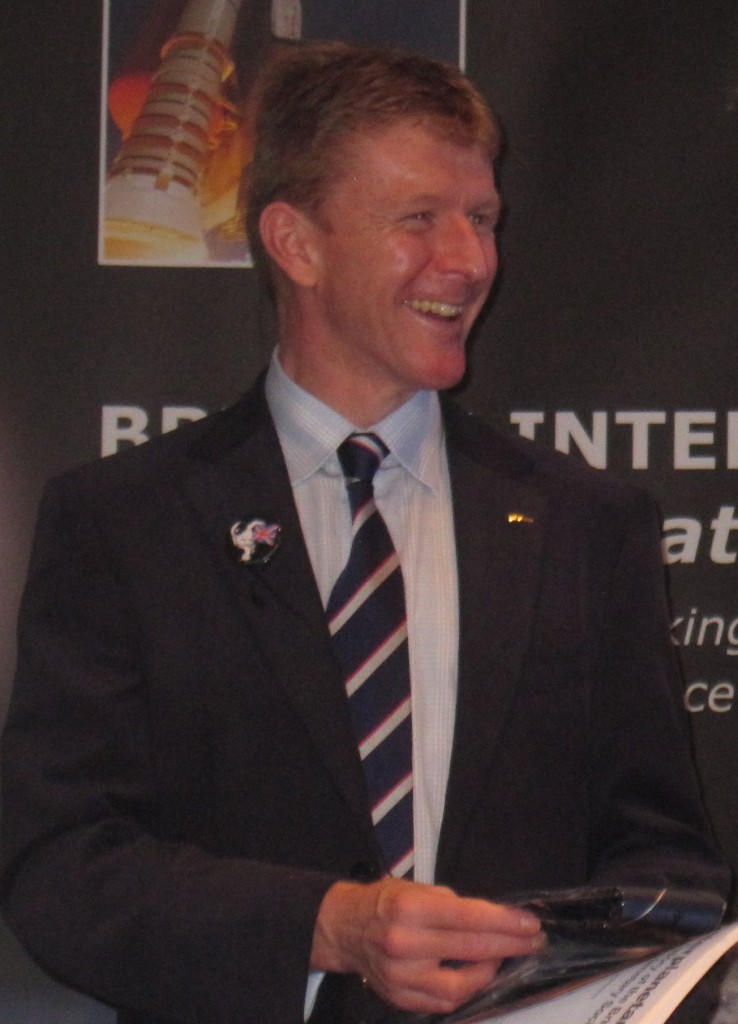 It was a wet February evening as I set out to hear British astronaut Maj Timothy Peake address a packed house at the British Interplanetary Society (BIS). Introduced as the first truly British non-commercial astronaut, a subtle smile creeps onto his face when it is mentioned that the UK government is paying for him though their contribution to ESA – a somewhat controversial point since at the time of his selection, the UK didn’t contribute to any part of the ESA human spaceflight budget.

One of the lucky (and extremely talented) few from 8,500 people who applied, Peake is now a full fledged member of the astronaut class informally known as “shenanigans”. Also in this class are Italians Luca Parmitano and Samantha Cristoforetti who have both been assigned to ISS flights in the coming years.

“Shenanigans” is not necessarily the first word you’d think of in relation to Tim Peake. His quietly polite enthusiasm, obvious dedication to his military career and measured tones are so quintessentially “British”. But there’s more to this gent than his (at times) reserved tone might suggest.

During his talk, Peake explains that the international space station is the current focus for space agencies, adding that he thinks it likely the ISS will be extended to 2025 (current plans see funding only up to 2020). This is something he’ll surely be hoping for, since ESA places on station are limited and the longer the ISS is functional, the higher his chances of being assigned to a mission.

In addition to his astronaut training, Peake has been working as Eurocom, the European version of NASA’s Capcom, relaying information to the ISS crew from one of the many international control centres. “International collaboration is great” he says, “it brings stability”, but with centres all around the world it is also very complex.

As he continues his talk, little flickers of his personality start to shine through – the intimate space at the BIS allowing him to relax a little. Peake explains that they have Soyuz training in Star City in Russia. The European seat is traditionally the left seat in the cramped capsule, while they joke that the right-hand seat is the “tourist” seat. “It’s a wonderful mix of new and old technology” he says of the Soyuz, though he adds that it’s “an ergonomical nightmare!”. “Their spacecraft are like their helicopters” he says of the Russian tech, “they’re solid”. Given that the Soyuz capsule comes hurtling back down to Earth at the end of the mission with a precious cargo of astronauts, being solid is not something to be knocked. 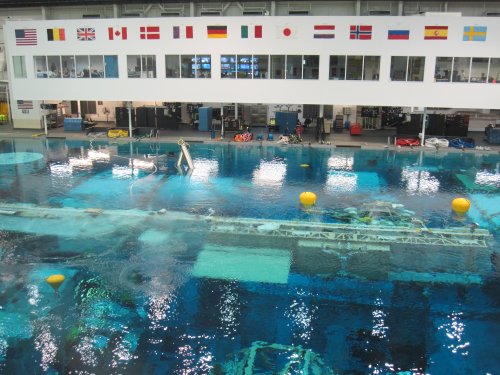 He talks about EVA (extra-vehicular activity – “spacewalk”) training, first in Cologne, then Russia, then at the enormous Neutral Bouyancy Lab facility in Houston. Astronauts do their spacewalk training underwater to simulate weightlessness and to get used to moving in the large space suits. “I really really love this training” says Peake, “I was surprised by how physically and mentally challenging it is – you certainly sleep well after six hours in the suit!”.

Peake speaks diplomatically about his selection to the ESA astronaut corps, a decision that may have put a few noses out of joint since the UK had not contributed the human spaceflight budget when he was selected. He was ready for a negative atmosphere when he joined, but didn’t find it. He says ESA Director General Jean-Jacques Dordain is very good at understanding that countries contribute to different pots of money at ESA, describing this attitude as “refreshing”. “The real test will be flight assignment” he says, knowing that positive sentiments are one thing, and confirmation of a spaceflight another.

Could the recent decision for the UK to put money into the Orion/ATV project help him get into space? “The ESA ministerial council was very good, for now, and for the future” he says, “I really hope that we get a European astronaut on Orion”. He continues “I would love it if it were me, however France and Germany paid a lot in too”. Peake reiterates his hopes for a European astronaut to get place on Orion, saying that it will be hard won since there are only four seats and there will be fewer missions. I note that despite the excitement in the room about the potential for a British astronaut, Peake repeatedly says “European”. Is this due to his training, his modesty, his diplomacy – or are we finally in a position to be proud of our involvement with ESA? It’s probably a mix of all those things, and I think that this international spirit should be embraced. 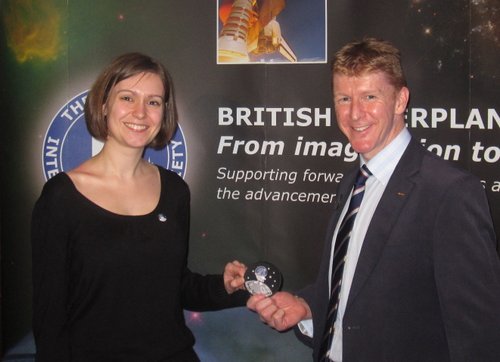 After the talk there is a rush for people to shake his hand and ask him to sign things. Peake takes this all in his stride, smiling as each new person reaches the front of the queue. I present him with the official patch of the Space Tweep Society in recognition of his engaging tweets. After half an hour of this it’s time to retire to the pub and I’m pleased that he joins us to continue the conversation in a more informal setting.

There’s a definite sparkle in his eye as he tucks into his steak and ale pie, answering questions from all angles between mouthfuls. I like this more relaxed side of him, and I hope that it won’t get too lost under the need for protocol and decorum in future. To coin his phrase: “The real test will be flight assignment” – I think we all agree that that’s one time it would certainly be okay to lose the stiff upper lip.

2 Responses to "Tim Peake Speaks! (At the British Interplanetary Society)"