Do you have trouble waking up in the morning when your alarm goes off? Me too, but today I don’t feel so bad about it, as it appears I’m in good company. The Rosetta spacecraft got her own alarm call today and it took a little while before she was ready to let the world know she was indeed awake. But there was rejoicing indeed when the ESA operations team in Darmstadt, Germany, received the signal to say she was alive and well.

In case you’re not familiar with the mission, you should watch this rather wonderful animated video to get yourself up to speed with the story so far:

..and so, it was time for Rosetta to come out of 31 months of hibernation – never have so many people stared so tensely at a green line waiting for news.. they waited… and waited…. Then Rosetta “phoned” home and put the minds of her team, worrying like parents of a teenager who has stayed out too late, to rest. 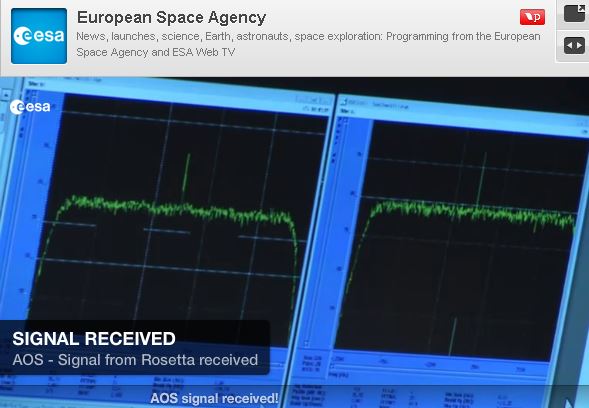 But what will happen in the next chapters of this exciting space tale? If all goes to plan, the story will just get more and more exciting.

First, Rosetta will chase down a comet called 67P/Churyumov–Gerasimenko. Space is big, really big, so even though she’s awake after hibernation, the journey will take until August and will require some rendezvous manoeuvring in May.

When Rosetta gets closer to the comet she’ll buzz around it in orbit, mapping the surface before releasing the precious cargo of Philae, the lander, in November.

Philae will have to complete the tricky task of landing on a comet. It’s never been done before. In fact, no spacecraft has even orbited a comet before, so this is really exciting, new stuff.

There are a couple of problems trying to land on a comet. Firstly, you don’t want to smash into it so hard you damage your instruments, and secondly you don’t want to bounce straight off it. Staying attached is no simple task either, especially when your comet is getting closer to the sun and starting to sublimate. To keep itself in place the Philae lander is going to use two harpoons to anchor itself to the comet and then the science can begin.

It will probe the nucleus of the comet, drilling down into it find out more what it’s made of, doing in-situ analysis of what it finds.

But that’s not all. Rosetta itself will continue orbiting the comet and will collect data on the changes to the comet as it travels around the Sun and back towards the orbit of Jupiter. The mission should last until December 2015.

“Rosetta’s main objective is to help understand the origin and evolution of the Solar System, in particular investigating the role that comets may have played in seeding Earth with water, and perhaps even life” say ESA.

Here’s my friend Dr Mark Bentley talking excitedly about Rosetta with me last year – he’s the Principal Investigator on the Micro-Imaging Dust Analysis System (MIDAS) which is part of the spacecraft. It will study the dust around the comet providing information on particle population, size, volume and shape. His enthusiasm is infectious…

listen to ‘Mark Bentley (@msbentley) on harpooning a comet: Rosetta is cool!’ on Audioboo