The space generation – those us of born after the beginning of the space age – have our very own organisation – the Space Generation Advisory Council (SGAC). Set-up fifteen years ago, the SGAC brings together 18-35 year olds from around the globe to share ideas and opinions on the current global space arena. The SGAC works with the UN, especially the United Nations Committee on the Peaceful Uses of Outer Space (UN COPUOS) and has permanent observer status with COPUOS. A yearly congress is held alongside the International Aeronautical Congress, bringing discussions via email alive around the table.

I’m proud to have been voted in as one of two National Points of Contact to the SGAC for the UK earlier this year and I attended the Space Generation Congress in Toronto at the end of September.

To be honest, I wasn’t entirely clear what to expect, but any situation that brings me together with new people from around the world – especially those who share my love of space – is something to get excited about. Having packed a vast array of cool space tee-shirts to wear I was a little alarmed to find everyone else donning suits, but my suitcase thankfully contained a few extra outfits to cover me for the smarter attire.

This was no holiday camp! We started earlier and socialised until late. Lectures from prominent figures in the space industry, such as DLR head Jan Worner and NASA’s Director of Advanced Exploration Systems Division, Jason Crusan, were mixed with presentations from SGAC scholarship winners and working group time. The delegation of around 130 people, from almost 40 different countries, split into working groups covering Cubesat swarms, on-orbit servicing, earth observation for maritime services, entrepreneurship, and the ethics and policy of new space exploration strategies.

I joined the group looking at the ethics of future human space exploration and we spent our time discussing how a growing commercial space market might sit alongside governmental exploration strategies, and what ethical considerations needed to be taken into account.

While the rest of our working group exploring existing and future policy requirements, our sub-group quickly realised that it was not for our small group to decide on what was or was not ethical, but to consider creating a system that could evaluate individual missions. Taking our lead from the ethical review boards needed for medical research, we favoured a path where an international ethics review board is created to evaluate the mission profiles and preparations from both government and private missions. 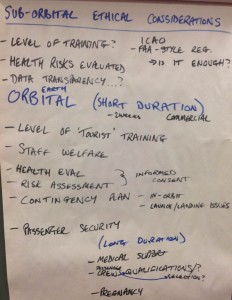 Since even the term “exploration” could be contentious, we divided different elements of human spaceflight into categories, and explored what issues may need to be considered for each one. The different categories included sub-orbital flight (which we decided was more likely to fall under general aviation control/policy in future), short-term low-Earth orbit flights, long-duration low-Earth orbit missions, beyond low-Earth orbit, and one-way missions.

The type of issues that we recommend bodies considering embarking on human exploration missions should consider included evaluation of health risks, informed consent for passengers/crew, contingency plans, medical support, and what to do in the case of a crew death. There would also need to be consideration of existing policies on planetary protection, utilisation and exploitation in space, and astronaut rescue obligations.

Our suggestion was that an independent review board be set up to evaluate the case for each mission profile that was to be launched, to ensure that there was some oversight on ethical issues.

There was some disagreement however about whether ethics board approval should be made a requirement, or whether it would serve as useful information for a launching state when they decide on whether to grant a licence for the launch.

We shall continue these conversations and write them up into a report that may be presented at the UN. If you have some thoughts on this topic we’d love to hear them – this is only the tip of the iceberg of a fascinating, and in my mind at least, important topic.

You can find out more about the different SGAC Project Groups, which are active throughout the year by clicking on the Project Group Page or by getting in touch with your national point of contact.