Liquid water on Mars – does it deserve the fuss? 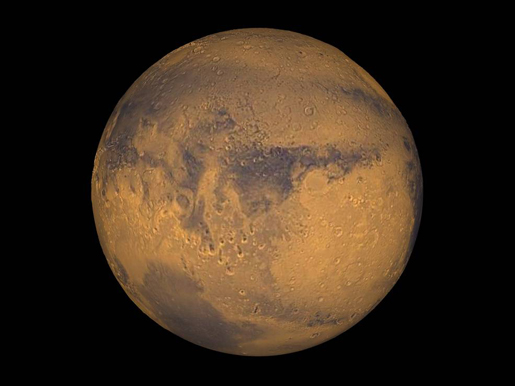 It’s been an exciting 24 hours for the online (and indeed offline) space community – first there was the “Super Blood Moon”, where a lunar eclipse allowed the Moon take on an eerie deep red colour in the early hours of Monday morning, and then NASA revealed what its much-anticipated  big announcement trailed as “Mars Mystery Solved” was all about.

“Mars is not the dry, arid planet that we thought of in the past” said Dr Jim Green, Director of Planetary Science at NASA at a media event on Monday afternoon. “Today we are going to announce that in certain circumstances, liquid water has been found on Mars.” 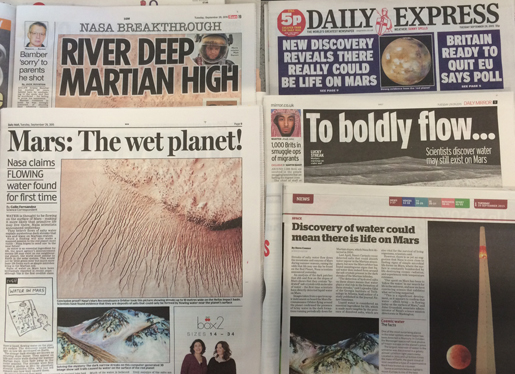 Cue much excitement and many bold headlines, but let’s just take a breath and find out what’s really going on…

So, water on Mars, but that’s old news isn’t it?

Well, yes and no. In 2008, NASA’s Phoenix Mars Lander confirmed the presence of water ice near the surface of Mars, but it’s liquid water that people are especially interested in, as this is considered to be a key to life.

In 2013, Mars Curiosity rover’s SAM (Sample Analysis at Mars) instrument found that a sample of Martian soil it had scooped up and analysed was 2% water. While not liquid, it was noted as being a relatively high percentage of water.

In April this year (2015), a paper was published that suggested there might be (transient) liquid water below the surface of Mars at Gale crater, according to readings from the Mars Science Laboratory.

So what’s new then?

For years spacecraft orbiting Mars have sent back images showing valleys, streaks, and gullies on Mars – they all looked like water was causing them, but there was no proof. Around four years ago scientists discovered features that they have named “recurring slope linnea”, which change with the seasons and temperature. These recurring slope linnea (RSL) – basically large streaks like you might expect to see if water was running down a mountain say – can be hundreds of metres long. 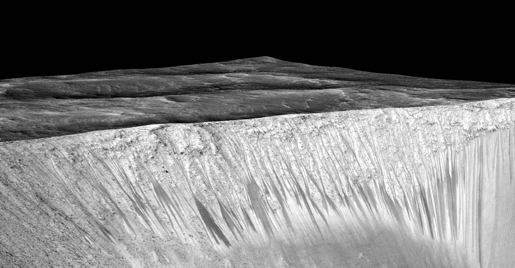 These “streaks”, pointed to water being the culprit, but “there had been no evidence of water” says Dr Michael Meyer, lead scientist for NASA’s Mars Exploration Program – who pauses for dramatic effect – “..until now”.

An instrument called CRISM (Compact Reconnaissance Imaging Spectrometer for Mars), on the Mars Reconnaissance Orbiter, has been used to analyse the chemistry of the streaks when they appear, and the results of this analysis are what is causing the current excitement.

There were two ways the scientists could confirm that the RSL are formed by liquid water. The first would be to use the spectrometer to detect liquid water absorptions on the surface, and the second would involve the detection of hydrated salts precipitated from that water.

The results published yesterday show the presence of hydrated perchlorate salts in the RSL regions, thus indicating the presence of water – though even when liquid it would be more of a salty mix than something you’d get from the tap!

Where is the water coming from?

We know that Mars has undergone some huge changes in its lifetime. Around three billion years ago it is believed that perhaps as much as two-thirds of the northern hemisphere of the planet was ocean, but Mars suffered a major climate change event and lost its surface water. The rovers that we have sent to Mars are finding a lot more humidity in the air than expected, and the soils are moist and hydrated.

But how do we get from water in the atmosphere, to flowing water?

The preferred theory revolves around the idea of “deliquescence” (yeah, I had to look that one up too). What this means is that the perchlorate salts, which are found on Mars, like to absorb water – so much water in fact that they can at certain times (e.g. when it’s warm enough) become a liquid solution, which trickles down crater walls and other slopes creating the RSL we observe. Perchlorate salts lower the freezing temperature of water by the way.

Other ideas that have been put forth are that the water could come from surface or sub-surface ice melting, or local aquifers. It could be that there are different mechanisms at different locations around Mars. 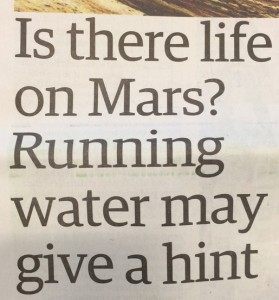 We often hear the mantra “follow the water”, and so of course finding liquid water is exciting, but as with most science, it’s usually a bit more complex than “found water, will find life”. I turned to Mars expert and NASA astrobiologist Dr Chris McKay to gauge how excited we should be – after all it was his passion for this stuff that got me involved in space in the first place. If this research was as big a deal as the newspapers would have us believe, he’d definitely be excited…

“All life on Earth needs liquid water to grow or reproduce. Life can be dormant in the dry state” he says. “Brines of sodium chloride (normal salt) are suitable for life even at complete saturation of that salt at -20ºC” – that means life can survive in really salty conditions, and studying extremophiles (organisms that can live in extreme conditions) as Dr McKay does, is a good way of understanding the limits of life.

He goes on: “However there are brines on Earth that are too salty for life. The most famous is Don Juan Pond in Antarctica. This is the saltiest liquid water on Earth and is composed of saturated calcium chloride. Nothing can live in the brine of Don Juan Pond.”

“The “liquid water” discovered on Mars is brine, and is a saturated solution of a salt known as perchlorate. This brine is even saltier than the calcium chloride brine in Don Juan Pond.”

Ah, this doesn’t sound good. It’s not time to get the “Welcome Martians” party banners out then?

Back to Dr McKay: “Such a brine is not suitable for life and is of no interest for biology. The result is of interest only geologically.”

Hmm. So basically, while this is fascinating research all the same, the “water” found on Mars is so salty it probably couldn’t sustain life (as we know it) – and even the Nature Geosciences paper says that: “If RSL are indeed formed as a result of deliquescence of perchlorate salts, they might provide transiently wet conditions near surface on Mars, although the water activity in perchlorate solutions may be too low to support known terrestrial life”.

I guess we best keep on searching then, and take those headlines with a pinch of (perchlorate) salt, eh?

7 Responses to "Liquid water on Mars – does it deserve the fuss?"