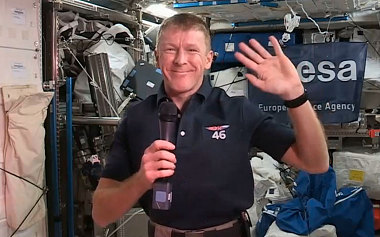 As Britain gets ready to welcome astronaut Tim Peake home from space, I can’t help be distracted by the heartbreaking news about MP Jo Cox, and frankly terrifying new EUref campaign poster from UKIP.

Mine is a blog about space, not about politics, but this is important to me – vitally important. Jo Cox’s life and actions, as well as these words, have inspired me to speak out.

It is correct that Tim is the first non-commercially-funded Brit in space, but none of that would have been possible if it weren’t for the European Space Agency, and the co-operation that comes from the member states.

No, ESA is not the same as the EU. Yes, we do pay subscriptions to be a member.

But we get money back, on a system of “juste retour”, whereby money paid into the European Space Agency is then invested back into the member states on a proportional basis.

There are certain aspects of ESA that every member country must contribute to, and then there are the “optional” programmes. Things like – you’ve guessed it – human spaceflight.

At the time that Tim Peake was picked in 2009, the UK did not put any money into human spaceflight at all. In fact it rankled a few nations that he was even picked for the astronaut class of 2009 because it meant that countries who were paying in to the human spaceflight stream were paying for the training of citizen of a country who put nothing into that pot. But Tim Peake was an excellent candidate. By all accounts I’ve heard – including from those on the selection committee – he was such a stand out candidate it didn’t matter that the UK wasn’t paying for his training, he earned his place.

Since then, the UK has dipped its toe into programmes such as ELIPS (the European Programme for Life and Physical Sciences) – allowing British scientists access to ESA’s microgravity research platforms, including the space station. This have been a huge boost to scientists working on space biomedicine in the UK. In 2012 we finally committed some money to the human spaceflight budgets also. 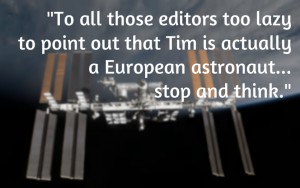 Did we cover the cost of training and then flying Tim to the space station with these investments? No. But, thanks to the co-operative nature of the European Space Agency, we were able to benefit from investments and resources from other countries.

During the EU referendum campaign there has been a lot of talk about protecting “Great” Britain and our achievements, how we would be better off out of the EU, but much less about how working together, and co-operating with other EU nations can also be a really great thing. Greater than the sum of its parts even.

So to all those people claiming Tim Peake for Britain, to all those editors too lazy to point out that he is actually a European astronaut, or even mention ESA, I ask you to stop and think, and reflect the fact that without the European Space Agency, you wouldn’t have a story to write at all.

Don’t pretend that we did this on our own. It’s a lie. Don’t just feed into the idea that we don’t need strong relationships with Europe, or that Britain will be magically better on its own, out of the EU. Remember that co-operation is sometimes the only way that we can achieve great things – like getting to Mars. No one nation could do that alone, and no one nation sent Tim Peake to space. It was a joint effort, and I’m tired of having to point that out to people.

There are big problems in the UK, huge shortages of housing, underfunding of schools and the NHS, pressure on our resources, but to blame all that on the EU, without taking a closer look at the way our country is run, is short-sighted, and dangerous.

Generation Z has a much more global perspective, and yet they are the ones who could inherit a nation that has cut its ties with its closest neighbours thanks to the EU referendum.

Look up to space, spot the international space station and think of the way Russian, American, European, Japanese and Canadian astronauts all work together, to keep each other safe and make progress. Of course it’s not always easy to co-ordinate multiple nations, but by standing together we can do so much more. So before you revel in the great achievements of Great Britain and “our” Tim Peake, remember that without our European and global partners, Britain wouldn’t have even got off the ground.