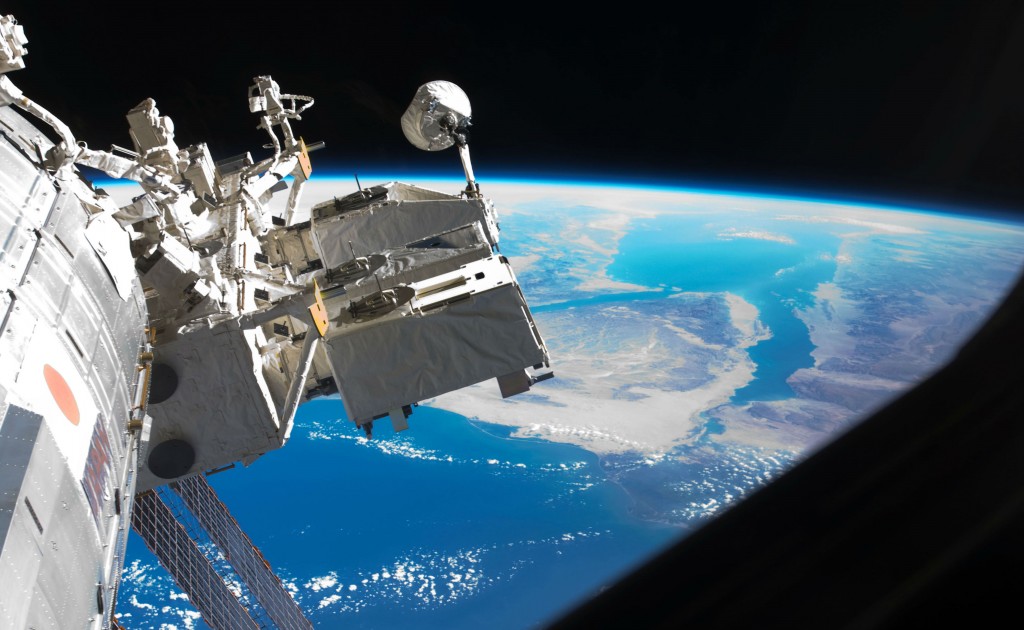 Japanese astronaut Soichi Noguchi may have made the mainstream media with his photos from the international space station some years ago, but ask the average person in the street to name the big players in space, and I’m willing to bet that Japan wouldn’t be at the top of their list.

Us space geeks on the other hand may know a bit more about their space activity. Perhaps it’s a fondness for the Japanese Kibo module on the ISS, an ability to name several of their astronauts (Koichi Wakata, Chiaki Mukai, Soichi Noguchi etc), awareness of the H-IIB ISS resupply rocket, or excitement about their asteroid sample return mission Hayabusa2.

But did you know that Japan has quietly been running a programme to promote space activity in countries that have previously had none? I didn’t. Well, not until a recent request to talk about Ghana’s first satellite – GhanaSat-1 – on BBC World Service programme Click Radio. I knew that CubeSats have been launched from the ISS and indeed, from the Kibo module, but this was the first time I had put some effort into researching them further.

I’m pretty excited about what I found out, and I don’t recall reading much (if anything) about Japan’s “Birds” programme, so I thought I would write something myself.

The “Birds Project” is a cross-border interdisciplinary satellite project for non-space-faring nations that is run by the Kyushu Institute of Technology and supported by Japan. Birds-1 saw five nations each develop and operate a 1 kg CubeSat (10 x 10 x 10 cm), which was then delivered to the ISS on a SpaceX Dragon capsule in June 2017, and deployed on 7th July 2017. 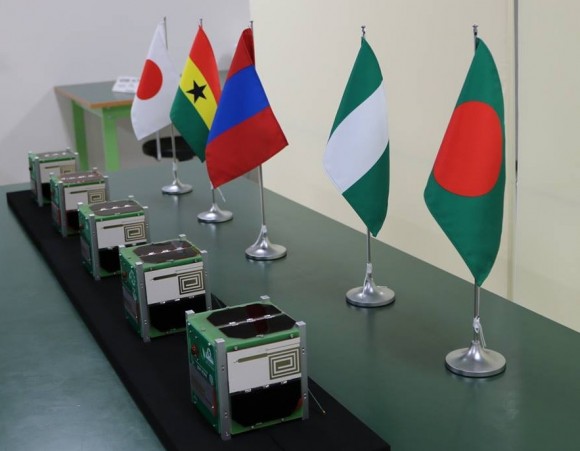 For Ghana, Mongolia and Bangladesh, this marked their first foray into space – a fact celebrated by the president of Ghana, Nana Addo Dankwa Adufo-Addo . Nigeria and Japan were the other countries involved with building satellites, and Thailand and Taiwan built ground stations to support the mission.

Launching from the ISS

It was a project of firsts: the satellites were delivered on SpaceX’s CRS-11 mission, the first time a re-used Dragon capsule has revisited the ISS (having been used on CRS-4 in 2014), it was the first space mission for Ghana, Mongolia and Bangladesh, and formed the first five CubeSat network with seven ground stations. 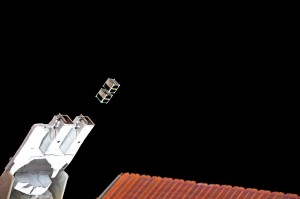 Deploying the Birds-1 cubesats from the ISS Credit: NASA/Jack Fischer

The CubeSats were deployed from J-SSOD – the JEM small satellite orbital deployer (JEM being the Japanese Experiment Module – a.k.a. Kibo). The CubeSats are delivered to the ISS ready-packed into satellite install cases, and astronauts onboard the station fix these to the multi-purpose experimentation platform (MPEP) pass through the airlock on a special slide table to the exterior of the space station. From there, the Japanese Remote Manipulator System (robotic arm) picks up the MPEP and moves it into the correct site for satellite release.

Another great example of International Cooperation today on @Space_Station –launched 5 micro-satellites from 5 countries off the JAXA arm! pic.twitter.com/w0pcvPJ64y

When launching CubeSats from the space station, you must be sure that you launch them into an orbit that will not clash with your own – else you could risk colliding with them, which would be at best, unfortunate, and at worst costs the lives of the station crew and perhaps the station itself!

The orbit of CubeSats launched from the ISS depends on the station’s altitude at release, and the ballistic force that they are launched with. They go into an elliptical orbit of an altitude of between 380-420 km and their life expectancy (before the orbit deteriorates and they burn up in Earth’s atmosphere) is anything between 100 to 250 days.

Birds-2 is already well underway, and successful launch of CubeSats from that mission will enable Bhutan, Malaysia and the Philippines to join the list of space-faring nations.

So why is this important? Or exciting?

Space is a brilliant source of inspiration and opportunity for new research and data that has a real tangible benefit to people on the ground, but it is costly. For nations that do not already have the infrastructure required to take part in space activities, the barrier to entry due to costs and technical expertise can be too high. This is especially true for countries that may still be thought of as “developing countries” in an Earthly sense, and yet they may stand to gain enormously from Earth-observation data that can be collected from space.

BRAC Onnesha – the Bangladeshi CubeSat – will take high resolution images to analyse vegetation, urbanisation, floods, forestry and water availability. GhanaSat-1 has high- and low-resolution cameras and will be used to monitor their coastline, as well as testing the effect of space radiation on commercially available microprocessors. They’re also going to play the Ghanaian national anthem and songs of independence in space!

Importantly, this is an issue of inclusivity. Space belongs to no single nation, and access to it should not be limited to those nations lucky enough to have a historic national space programme, or enough cash to build one. Space exploration is increasingly considered an international endeavour, and it is important to me that we involve as many nations as possible. Those countries with expertise and facilities should offer a helping hand to those without access to the same opportunities as them. In the end, the more minds and perspectives we have working to solve the problems of long duration space travel, the better.

Congratulations to the whole Birds-1 Project Team for their successfully satellite deployments!

Bravo to Japan for opening these opportunities for non-spacefaring nations – and here’s hoping that the teams’ success will spark a bigger interest in space in their home countries. The ability for space research to transcend national borders and politics is something that makes it special – let’s not leave anyone behind.

Posted in Did you know? Journalism
No Comments Yet Posted by SpaceKate