There are plenty of space-related apps to check out in the Google Play store. I decided to download a bunch, play with them for a bit and share the results. They are all freebies, this is not an exhaustive list, it’s just the start of a potentially useful list for other Android Space fans. I’ve separated apps into categories for ease of use. NASA has several official apps, but I’ve only spotted one from ESA. Perhaps there’s a gap in the market for them there.

NASA
The main NASA app gives you quick access to NASA images, videos and tweets, as well as information about its missions, centres and different programmes.

This takes information about your location and so the sighting information is tailored to you. The news and features sections is also a handy gateway to the latest news from NASA, and can be separated into areas of interest, such as commercial spaceflight, solar system, ISS etc. You need to be connected to the internet in order for this app to work, but it makes for a nice way of exploring the mountains of information that NASA puts out. Worth a download.

Things that you might find particularly useful are the list of launch dates (under the “missions” tab) and a list of possible times to view the space station. 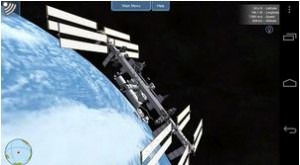 This app has some cool features, like checking out the astronauts’ timelines (as you can do online on the ISS live website), though it does seem to freeze up a bit for me. You have the option of following the current position of the space station and see the Earth from its perspective. It’s a nice way of making it “real”, seeing what the astronauts are flying over, right now, is quite special. The other nice thing this app offers, if you can coax into not crashing, is a 3D model of the entire space station, with different elements coloured to show whose they are. You can choose to see only the Russian modules, or the Canadian elements, for example, or see what the station would look like without them. Zoom functionality, labels and ability to spin it around to see it from other angles are all useful. I do like this, but be warned that it needs a net connection and a bit of patience.

This app lets you explore a 3D visualisation of the Desert Rats base. By moving your character around you unlock badges when you discover items such as the space exploration vehicle, these also give you a summary of what they are. You can also choose to explore the different scientific sites that the Desert Rats were studying. It gives a nice insight into the scale of the project and may be a good stepping off point to encourage you to find out more.

This app allowes you to view Cygnets (observational and modelled space weather products, since you ask) and update them with the latest information from SDO, STEREO and SOHO. There isn’t really any information about what the images are showing you, or background about the spacecraft responsible for collecting the data, but even if you’re not an expert, the pictures of the sun are pretty incredible. The more you know/understand about space weather, the missions and the graphs this apps include, the more spectacular it would be. For now I just enjoy the fact that I can see up to date pictures of the sun’s activity on my phone, which is, I think you’ll agree, pretty amazing.

Lots and lots of lovely images! Sorted as the latest images released, highest rated or by category. You can favourite images, save them to your device or set them as wallpaper, and share them via Twitter/Facebook. Clicking on the “i” gives you information about what the image is of, how and when it was taken, and who should be credited. You can also find out more by clicking “more info” and it will take you to the image catalogue online. The main problem with this app is that once you’ve been tantalised by the amazing thumbnails, loading the full image seems to take an age. You can go to settings and change the resolution of that you want the images to download, but I got bored of waiting to see the full screen versions. Patience is a virtue Kate… 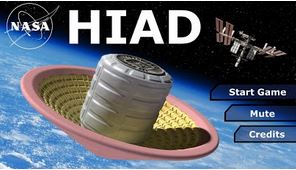 This NASA app is actually a little game that lets you practise landing something back on Earth from the International Space Station, using a hypersonic inflatable aerodynamic decelerator (HIAD). I didn’t know much about these before, but this engaging little app is giving me an appreciation of how they can be used and the importance of timing your de-orbit burn to get you close to your landing site. It’s a shame this doesn’t have a catchier title, it’s a really nice app and I’m enjoying playing with it and learning something at the same time. Check out this NASA microsite for the latest on HIAD development.

Herschel Quick Look
This app apparently gives you access to the  ”latest processed quick look image and meta data” from Herschel. If you get further than downloading it and getting errors let me know. Looking at Play Store reviews it’s either great, or doesn’t work. Sadly for me, it’s definitely the latter.

ISS detector uses your phone’s geolocation data to give you a handy list of when the space station will next be flying (visibly) overhead. The added bonus is that you can set it to make a noise at a specified time before a sighting. I chose ten minutes since that is long enough for me to grab my camera and dash outside. Don’t worry about it disturbing you in the night, it will honour any “silent time” settings on your phone. In addition you can select information on Iridium flares. To remove ads you can donate one Euro ($1.40) to say thank you to the developer. There are also a range of extensions that you can purchase that will enable detection of amateur radio satellites, famous objects (eg Hubble) or comets and extensions. Useful little app this one, especially since @Twisst has gone quiet for me.

This app, created by AGI, the folk behind the professionally used STK orbit simulation software appears currently to be available only on Android (take that Apple fans!). It is an augmented reality app that allows you to see which satellites are fly above you. You can choose what you want it to show, the ISS, potentially visible objects, amateur satellites, recently launched objects, or, if you want to be amazed, try “all active satellites, including Geostationary belt”). You can also search for particular satellites that you might be interested in, such as the UK’s first Cubesat, STRaND1. If your chosen satellite is not currently visible, click “Lookup” and it will link you to a bunch of information sources and the option to display the groundtrack. The groundtrack of the satellite is basically a line over the world that shows where over the world the satellite has passed, and where it currently is. Pretty nice to be able to look at a world map and say “ooh, the ISS is over the West Coast of America” etc. This is free, informative and even if like me, you’re more into human spaceflight than satellites, it’s pretty eye-opening to see just how much stuff is up there.

Solar Max Lite
This is the free version of a fuller app. It uses realtime data from SDO, STEREO and SOHO. You can select the number of frames, the resolution and time between each frame, though I haven’t quite worked out what difference this makes! What this app does have, which makes it more user-friendly for non-experts, is the ability to click on a question mark and find out a bit about the spacecraft/image data/instruments. Once again, even if you don’t know much about what it all means, real-time images of the sun are COOL.

Not created by NASA, this app gives you a collection of sound clips that range from the famous Apollo moments (“Houston, we’ve had a problem”) to the comments made when the final shuttle missions STS135 landed. It also has Sputnik’s beeps and Saturn radio emissions. If you hold down on any sound you have the option to make it into a ringtone or notification sound, though I’ve not found anything that I consider suitable for this myself. I’m a sound geek as well as a radio geek, so this appeals to me. That said, the selection of sounds is limited, and they could have perhaps been edited a little more smartly.

This app simulates the orbits of planets or “particles”. It could be quite a useful tool if you were learning about the effect of gravity on variously sized objects, but it’s not very user friendly. You can add different sized objects, trace their paths and watch as they smash together, but there’s little text to tell you what all the icons mean and you feel somewhat thrown in the deep end. I played around for a bit, but I think this is one for the uninstall pile for me. If you do get the hang of it, there is the option to purchase dust clouds etc, but it’s not for me.

This actually isn’t about space in the sense of outer-space, but it’s an academic study from Princeton that I thought I would mention. Nice to be able to help some scientists with their research after all. The research is into human movement and spatial segregation and the researchers want to collect information about your movement over the course of the week. Past this point you will be able to collect the information for yourself (and keep it private) if you wish. There’s a consent form and information about anonymising your data. I’m game… are you?

A bit of fun

The Space Race
A bit of fun, this quiz gives you 50 questions about the US/Soviet space race mixed with a few other space-related questions. The app design is a bit horrible and it will offer you a bunch of other quizzes, but the questions themselves are pretty good. You actually need to have some knowledge to answer them so if you want to test your space-geek credentials give it a go. You can always uninstall it afterwards (or perhaps try the science and engineering week quiz?).

You don’t need me to tell you about Angry Birds Space – developed with input from NASA the birds are beholden to the gravitational pull of various objects and have to smash the green piggies as usual. With a launch from the Space Station, by astronaut Don Pettit, it’s worth a little play. Nice thing is, on Android, Angry Birds is free. Bazinga!

Posted in Resources Review
No Comments Yet Posted by SpaceKate