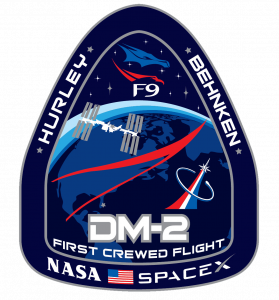 If you know me (and even if you don’t) it’s pretty obvious that I like rocket launches, which is why today, 27th May, 2020 is an exciting day. If the weather cooperates, we’ll see the first commercial crew flight – with astronauts on board – to the International Space Station (ISS), and it’s launching at 4.33pm EDT (9.33pm BST).

What’s so special about that – astronauts go to space all the time don’t they?

Apart from the fact that rocket launches are cool, there are several elements of this mission that mean it’s a big deal for the space community – especially those in the USA. For the last nine years, every astronaut and cosmonaut to have flown to the ISS has flown on a Russian Soyuz rocket, launching from Kazakhstan (roughly every three months). Soyuz has been the only human-rated vehicle capable of reaching, and docking with, the space station – meaning if anything ever stopped Soyuz flying (as happened in November 2018) it could mean serious problems  (including, potentially, an early end to the ISS programme). Today’s Demo Mission 2 (DM-2) launch also includes a number of “firsts”:

When is it happening?

The launch is scheduled for 4.33 pm EDT – which equates to 9.33pm BST. It is an “instantaneous launch window”, meaning that if there is any hold up at all they will have to try again in the next available launch window, which would be either 30th or 31st May. The reason they can’t launch at any old time is that they have to time the launch to match with the position of the space station (which is orbiting the planet at approx.. 17,500 mph!) in such a way that their rocket can basically chase, and catch-up with, the ISS ready for docking. You don’t want to risk crashing into the ISS, and nor do you want to be so far away you run out of fuel before you catch-up with it!

How can I watch?

With COVID-19 social distancing rules in place, even if you’re lucky enough to be on the space coast near Cape Canaveral, you should really stay home and stay safe. For those of us watching from around the globe, you’ll find livestreams available online on NASA TV which begins its official launch programming at 12.15pm EDT (5.15pm BST) and also on the SpaceX website at the same time (I’m not clear if SpaceX will run the same content as NASA or create their own coverage). If you’re in the UK, its ISS-spotting season, so if you wanted to tear yourself away from the launch coverage between 21:20 and 21:27 depending on how dark it is, you might just about be able to catch the ISS overhead. Else just wait for the next pass just before 11pm, although this won’t be so high in the sky, so it depends on how clear your horizon is. Excitingly, because the Crew Dragon is chasing the ISS, it will also pass over the UK – so if you’re able to, pop outside and look to the south-west and try to spot it at 21:53! It won’t be anything like as bright as some of the good ISS passes are, but how awesome would it be to watch a launch online, and 20 minutes later watch that same vehicle fly over your house? Here’s hoping for clear skies! You can find out when to look out for the ISS and Crew Dragon with the amazing (if basic looking) Heavens Above website. 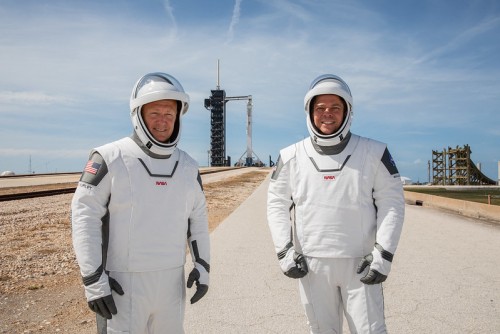 Two astronauts are going to be onboard Crew Dragon for this flight (though it has the capacity of four crew members for NASA missions, and up to seven according to SpaceX) and they are NASA spaceflight veterans Robert Behnken and Douglas Hurley (who piloted the final space shuttle flight back in 2011). They will join the ISS Expedition 63 crew on the space station – for an as-yet undecided – stay (though the Demo-2 capsule has a 110 day on-orbit limit).

How can I find out more?

Check out the “Launch America” pages on the NASA website and find out more about Crew Dragon and Falcon 9 on the SpaceX website. Space social media is already a-buzz with people discussing the missions and getting excited to watch the launch today. The #LaunchAmerica hashtag is being promoted by NASA, but you’ll find plenty of people using #SpaceX #DM2 (Demo Mission 2) #CrewDragon and more. I like to tweet about #LaunchClub and find out where in the world people are watching – launches like this always attract a big international audience, which is awesome. As is traditional, I’ll say “God speed” Crew Dragon, Bob and Doug, may you have soft landings (does that count for splashdowns?), and I’ll see you all later this evening, tweeting frantically as @SpaceKate!