Is US-Russian space co-operation at risk?

Today I was alerted via Twitter to the news that “all NASA contacts with Russian Government representatives are suspended, unless the activity has been specifically excepted”. This is as a result of the ongoing situation in Ukraine in relation to the sovereignty of the nation. My initial concern was what this would mean for operation of the International Space Station whose major partners are the US and Russia.

A leaked memo clarifies this concern, stating that “Operational International Space Station activities have been excepted”. The memo, apparently send yesterday by Michael F. O’Brien, Associate Administrator for International and Interagency Relations was leaked to spaceref.com (where you can read the full text).

Dmitry Rogozin, Deputy Prime Minister of Russia turned to Twitter to play down the move, stating that “apart from over the ISS we didn’t cooperate with NASA anyway”. 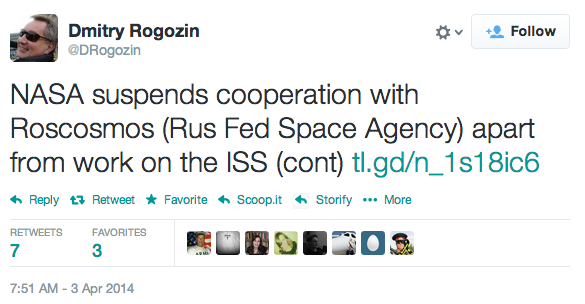 So is this something that we need to be concerned about?

Personally I think that the answer is yes. After years of being sworn enemies, the US and Russia found ways to work together in space, first via the Apollo-Soyuz Test Project and now with the incredible symbol of international co-operation that is the International Space Station (ISS). NASA Administrator Charles Bolden was quoted as saying that relations with the Russians were “normal” just a few weeks ago during a budget teleconference, adding “I think people lose track of the fact that we have occupied the International Space Station now for 13 consecutive years uninterrupted, and that has been through multiple international crises”.

It seems a shame therefore that this relationship, crucial to the success of the ISS should be put at risk by political forces. Whilst the ISS operations are excepted from the suspension, it hardly sends out a great message of co-operation. If I were an American politician I think I would be wary of rocking that boat at the moment, especially since the US is currently entirely reliant on getting its astronauts safely to and from the space station since the retirement of the shuttle. It is one thing for them to want to appear to be playing “hard ball”, but have they considered the potential repercussions? What if Russia decides it won’t honour future contracts to fly US astronauts to the ISS? It’s unlikely, but there is the potential that the US astronaut onboard the station could find himself with no way of getting back to Earth.

I can’t imagine that the astronauts and cosmonauts in space (nor the ground teams supporting them) would allow earthly politics to affect their life on station too much – after all they rely on one another to stay alive and keep the multi-billion dollar station functioning. But it doesn’t stop this situation from troubling me.

The International Space Station has been hailed as the most complex international engineering project in history. I hope that all the work, money and inspiration doesn’t get muddied by politics while its in its prime.

Statement regarding suspension of some NASA activities with Russian Government representatives:

“Given Russia’s ongoing violation of Ukraine’s sovereignty and territorial integrity, NASA is suspending the majority of its ongoing engagements with the Russian Federation.  NASA and Roscosmos will, however, continue to work together to maintain safe and continuous operation of the International Space Station. NASA is laser focused on a plan to return human spaceflight launches to American soil, and end our reliance on Russia to get into space.  This has been a top priority of the Obama Administration’s for the past five years, and had our plan been fully funded, we would have returned American human spaceflight launches – and the jobs they support – back to the United States next year.  With the reduced level of funding approved by Congress, we’re now looking at launching from U.S. soil in 2017.  The choice here is between fully funding the plan to bring space launches back to America or continuing to send millions of dollars to the Russians.  It’s that simple.  The Obama Administration chooses to invest in America – and we are hopeful that Congress will do the same.”

Tweets from Marcia Smith of SpacePolicyOnline.com report the following comments were made by Charles Bolden at a meeting in Washington this morning (though I’m so far unable to locate a transcript of what was said):

Bolden to ASEB/SSB re Russia: I tell my ppl — unless I tell you otherwise, don’t stop doing what you’re doing.

3 Responses to "Is US-Russian space co-operation at risk?"