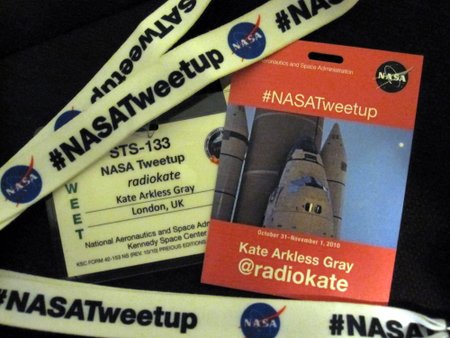 I’ve spoken before about my excitement about getting chosen for the NASA Tweet-up for the launch of STS-133, and how wonderful it was that the tweet-up members formed such a great community, even before we met in real life. Now I guess it’s time I shared my experience of the Tweet-Up itself, especially as I’m due to go the another one at NASA Ames next week. I can’t get too far behind!

After my initial high-pitched excitement about getting chosen, I began to panic. How much would it cost, how would I get around (I don’t drive), how would I cope with being in a large group of people I don’t know? That’s why I set up the Google group for the tweet-up. I thought that maybe 5-10 people might sign up. We could get to know each other, perhaps share tips on cheap hostels. Little did I know that this would end up with over 100 of the 150 tweet-up attendees on a list, organising shared-housing and sharing our excitement with one another. It was great.

When I found out that the launch had slipped by a day, I didn’t mind at all. I was told the news by a smiling Danny Sussman (@thesuss) who met me at the airport with Leslie Berg (@leslieberg). We set off for the first of the shared houses, and started collecting other tweet-up members along the way. That first night was so special, meeting the early arrivals and sharing pizza together. This was going to be great.

Once we were all badged up, proudly sporting our official NASA Tweet-Up lanyards it was time to head for the Tweet-Up tent. You cannot imagine the excitement in the car as we successfully showed our badges to the security guards at Kennedy Space Centre and were waved through. Magic. Andy ‘Flux’ Rechenberg (@therealdjflux), Nathan Bergey (@natronics) quickly formed a firm friendship, and the ‘Dream Team’ revelled in the drive down the long road towards the Vehicle Assembly Building.

The VAB is huge. I mean, really huge. To watch its looming form grow on the horizon as you get closer and closer is quite spectacular. There was a lot of “wow”-ing. We arrived at the press site and walked towards the tweet-up tent, catching our first glance of the shuttle on the pad. A real shuttle, standing, waiting for lift off, and I could see it with my own eyes. But wait, there’s more. We turn a corner and there it is, the countdown clock. The enormous clock that will show the countdown to lift off, be featured on media broadcasts all around the world, and that displayed the countdown for the rockets that went to the moon. This place is steeped in history, and I’m here giddy with excitement. 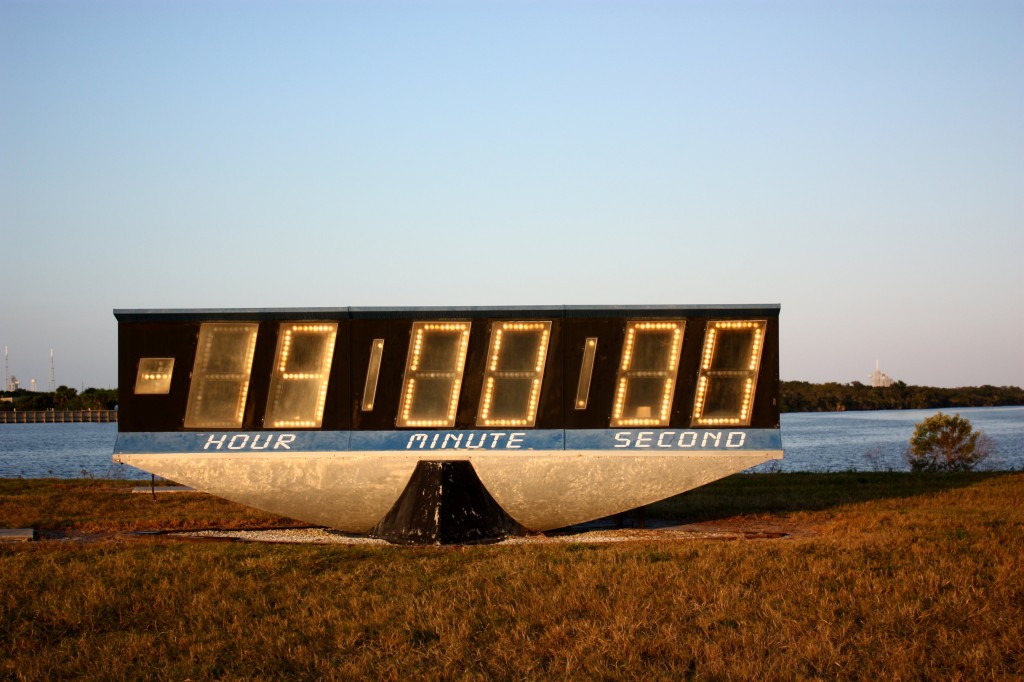 Countdown clock at the 19 hour hold

The official tweet-up activities involved a day of talks from members of the shuttle programme and Discovery’s launch team, a senior executive from Twitter and astronaut Ron Garan (@astro_ron). We listened avidly as Bill Gerstemaier from NASA headquarters explained what had caused the launch delay, and then held up the piece that had caused the problem.

Talks are great, but we were itching to see stuff, and we weren’t disappointed. We were given a demonstration of how to put on an Advanced Crew Escape Suit (the bright orange suit worn for launch). It’s a bit more complex than your average outfit for the office. I took a video of the process if you’re interested:

Then it was on to our introduction to AstroRobonaut 2. Well, his twin at least. The real @AstroRobonaut was packaged up in the payload bay of the shuttle on the pad, ready for his first trip to the international space station (ISS). AstroRobonaut is set to be the first humanoid robot in space. It was designed by NASA engineers in conjunction with General Motors to help astronauts in their activities about the ISS.

Next up on the menu was an incredible tour of Kennedy Space Centre. Our bus tour took in the Orbiter Processing Facilities (where the shuttles are stored and prepared for flight), a crawler (the enormous vehicle that transports the shuttle to the pad), and the Shuttle Landing Facility (complete with 3 mile long runway). The extreme highlights though were the stops at the VAB and launch pad 39A, where our beloved Discovery stood, magnificent in the twilight.

The VAB, the largest single-storey building in the world, and 4th largest in terms of volume, is where they attach the shuttle to its external tank (ET) and solid rocket boosters (SRBs) before it moves to the pad. It’s also where they put the Saturn V together in preparation for the Apollo moon-landings. There are still elements of the original metal scaffolding used to hold the Saturn V. This place is definitely not open to the public, we were honoured to be able to walk around and humbled by both its size and historical importance. 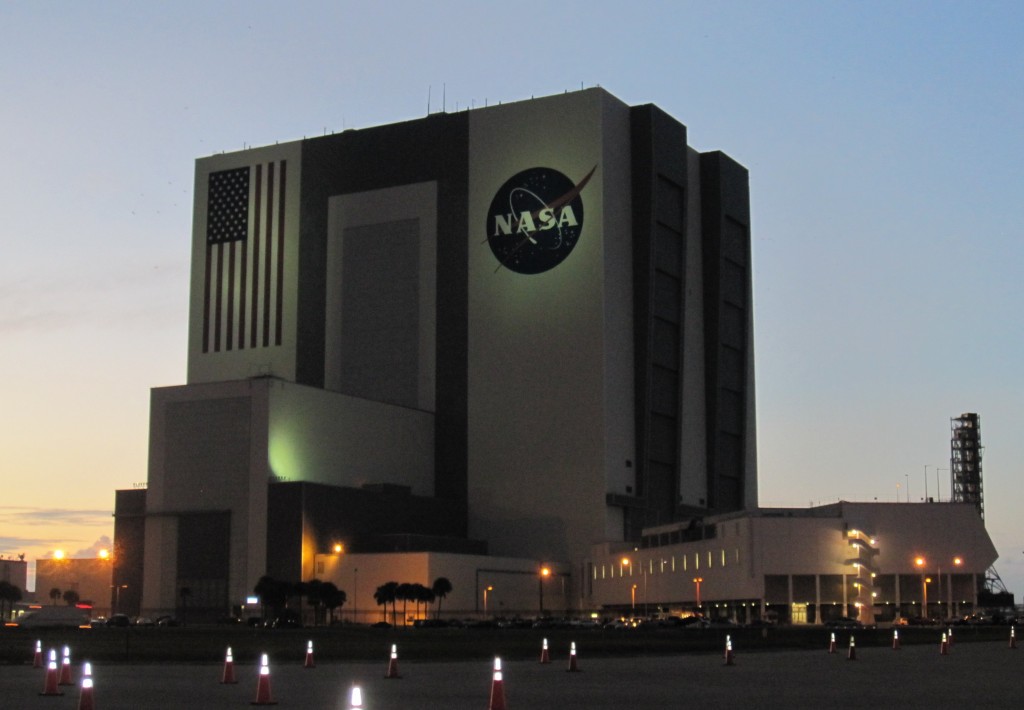 Here’s a short video clip I recorded in an attempt to show you just how enormous this place is:

I took this photo lying on the floor looking up.. 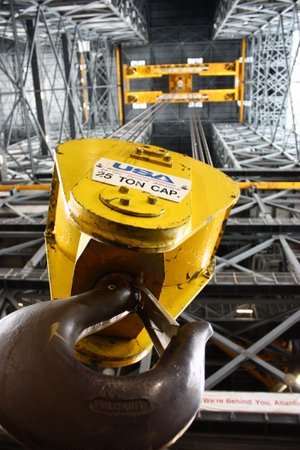 As we alighted the bus by launch pad 39A I was transfixed by the sight of the shuttle, just 455m away from us. I can’t really explain it. I just wanted to (and indeed did) run around pointing at it and telling people “there’s a shuttle over there, a real shuttle, and it’s over there”. As if they hadn’t noticed it. Despite being partially obscured by the Rotating Service Structure (RSS), the shuttle looked magnificent. I was in awe. After all of the talk, the photos, the glimpse in the distance, there it was. A real shuttle, sitting there on the launch pad. We were (or so we thought that the time) going to watch that bird fly in a couple of days time. It was almost unreal, and yet there it was, directly in front of me.

listen to ‘”There’s a shuttle over there!” Oh, WOW! Shuttle Discovery on the launch pad! #nasatweetup ’ on Audioboo 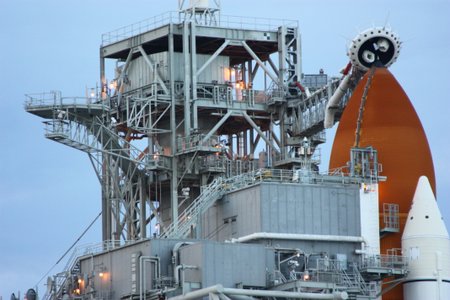 There was another launch slip, this time due to the weather, but everything was looking good for a Friday launch. I didn’t mind about the launch slips, I’d spent the time getting to know my fellow tweet-up members, touring the KSC visitor centre and drinking Guinness with astronauts. What a thrill.

We could barely sleep for the excitement on Thursday evening, and woke up bright and early on Friday. Nathan had his home-made countdown clock running, I triple-checked I had all my cameras, batteries, wires, phones, and other devices at the ready. At the “Big House”, the shared house I was staying in with 16 others, people were out on the small jetty, bouncing around and watching the sun rise. The atmosphere was electric. This was it. The big day was finally here.

Flux arrived and the Dream Team set off for KSC, so eager to get there that we arrived before the 8am cut-off point which would allow us through the gate. The sign on the side of the road that had been counting down the days until launch finally said “0”. This was it. We took it in turns to choose the best music to suit the magnitude of the occasion.

As I stepped out of the car, I heard a beep from my mobile phone. Barely anyone has my US number, and it was early in the morning. My heart sank. I’d met someone earlier in the week who was part of the launch team and asked him to send me details if he had them. He’d already sent me a text at 5am: “Go for launch” had made my heart leap. I just knew something was wrong when I heard that buzz. Gingerly I checked the message. There was just one word, and it was not a good one.

We’d not even made it to the Tweet-Up tent, and already we knew, if unofficially, that things were not looking good. The most enthusiastic of us had all shown up early. Other people with contacts were looking serious and stoney-faced and news quickly spread among the group that something was wrong.

We finally got official word that the launch had been scrubbed for the day. A fuel leak had been discovered. It would not launch until Monday at the earliest, and even that looked shaky. We stood around, numb. Not entirely sure what to do with ourselves. I stepped outside.

It was then that I noticed a Discovery flag had been added to the flagpole with the US flag by the countdown clock. My eye was drawn to it as a vehicle drove up, a man got out and then proceeded to lower the flag. It was one of the saddest things I’ve ever seen. Such a simple action, and yet such a profound meaning. I couldn’t help it, I cried.

I wasn’t the only one. The group exchanged hugs and even Tweet-Up organiser Stephanie Schierholz welled up as she explained the news. It was a very emotional moment.

A little while later, whilst sitting, looking over at the Shuttle on the pad with a small group of tweeps, Karen James (@kejames) got a very special call. It was from one of the astronauts due to fly, Michael Barratt. We learnt that they were being taken out of quarantine. That was it. There was to be no launch in this window.

Since then, the community has stayed close, we’ve seen three other potential launch windows come and go as no explanation could be found for the cracks in the external tank’s stringers. One of the original crew has had to be replaced following a bicycle accident, and I’ve become a Space Nomad hopping around the US visiting as many space sites as I can manage.

We’re just beginning to get excited again as the next launch window, with target launch date of 24th February, approaches. It’s the chance of a lifetime, so thank you NASA for allowing us to return to the press site for the launch. I can’t wait to see Discovery fly, and to share that moment with the wonderful people that I’ve met along the way.