My first shuttle launch – there are no words 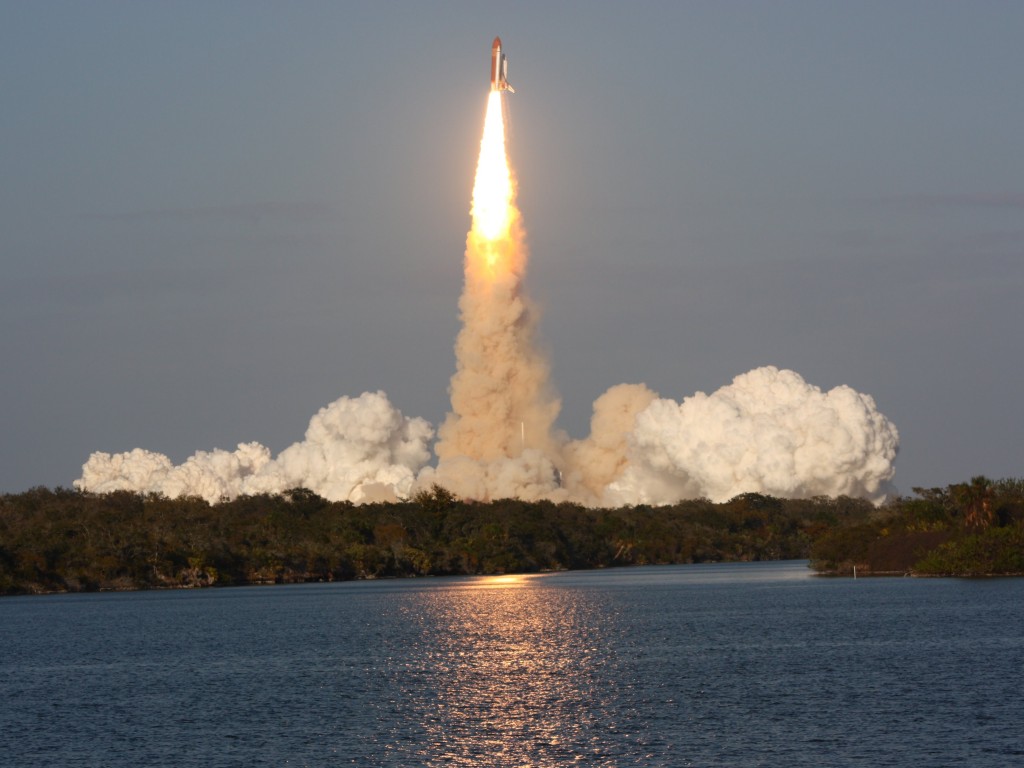 Yesterday I watched shuttle Discovery land for the final time, and I realised that I’ve not yet posted a piece here about the launch. I wrote a piece for the National Geographic Assignment Blog, but it wasn’t all that easy to do. How could I find words to explain launch day?

I’m still struggling if I’m honest. I guess that’s why it’s taken me so long to force myself to sit down and do this. The problem is, there are no words.

There are no words that can sum up the culmination of four months of waiting.

There are no words to explain the feeling you get when you’re surrounded by a group of new-found friends, sharing a once-in-a-lifetime experience.

There are no words to capture the brightness of flames from the solid rocket boosters, or the sheer power of force and sound that hits you moments after lift-off.

With that caveat in place, here’s my poor attempt to describe what it is like to watch a shuttle launch from the press site at Kennedy Space Centre…

We arrived many hours before the launch was due to take place, but the hours of waiting melted into a blur of wonderment, excitement and interesting talks kindly organised by NASA TweetUp hero Stephanie Schierholz. Our robotic friend, Robonaut 2, twin of AstroRobonaut (who was safely packed into the cargo bay of STS-133) had evolved since the last time we met in November. Instead of a legless torso, he now sported a carriage with wheels and was dubbed Centaur-naut. 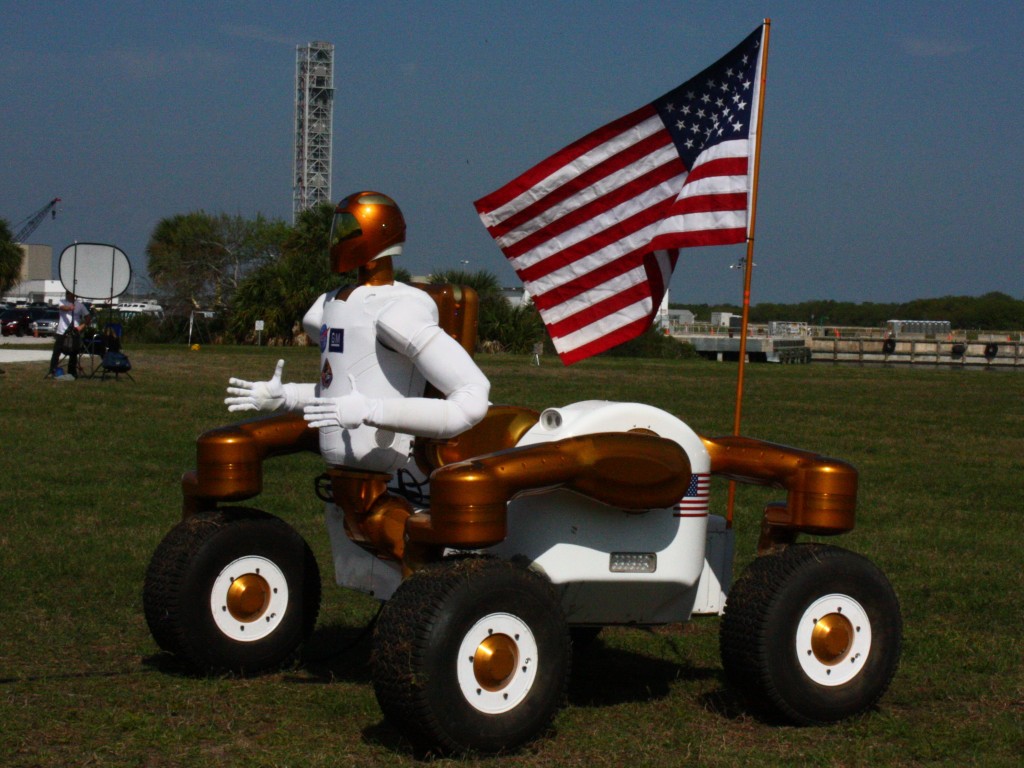 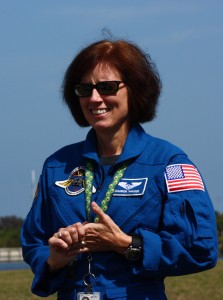 We heard from Shannon Walker, who returned from space just before Christmas. She was inspirational, radiant, and full of smiles. Then former astronaut Leland Melvin wowed us with his energy and ability to tell a good story. He did what most astronauts are not allowed to do, he told it how it was, he made it real, and he made sure that I will always smile when I hear the word “Anaconda”.

The sun was shining, there were media people buzzing all around and tripods lined up all along the waterfront. The car-park beside the press site was full of an army of satellite trucks, waiting to beam news live to the nation, live to the world. It was so different from the last time I was there. We had arrived so eagerly, and so early that we beat the media there. They didn’t have time to come down and set up before we heard the launch had been scrubbed.

Discovery’s flag was flying with the US flag on the pole beside the countdown clock. I hoped that I wouldn’t have to witness the heartbreaking sight of the flag being lowered in the event of a scrub. That was the thing that broke me last time. The poignancy of that simple gesture had brought tears to my eyes.

Today was different. Everything seemed positive. All systems go! I felt like I was dreaming.

Leaving plenty of time before launch, I headed down to the water where I had set up my tripod earlier in the day, claiming my little slice of prime viewing. I set up my kit, SLR, point and shoot, video and audio. I rehearsed the order in which I would switch things on, hooked up the shutter release so there would be no watching through a viewfinder, and felt my heart racing.

I felt nervous and excited. I had to fight my body’s production of adrenalin in order to stay still. My hands were shaking. There was some commotion as we heard that the clock had been stopped at five minutes. There’s not usually a hold there. Information slowly trickled in that there was problem with a computer involved with range safety. For the moment, we were “no go”. There wasn’t really time to let this sink in properly. Information was scarce and we were trying to piece it together. Suddenly there was a shout of “the clock is counting down again!”. It was sweet music to our ears. I set everything recording, yelped as Nathan tripped over my tripod knocking the shuttle out of frame seconds before launch. I scrambled to fix things and then there it was.

A huge white cloud of emerged from the base of the shuttle, then brightness so intense it was almost hard to look at. There was no looking away though. This was it. Discovery was on her way. My heart was in my throat as memories of nightmares I’d had popped into my head. I remembered how I felt watching Paolo Nespoli launching on the Soyuz. I thought of Nicole Stott’s husband Chris, and of Karen James, standing just behind me watching her friend Mike Barratt launching into space. 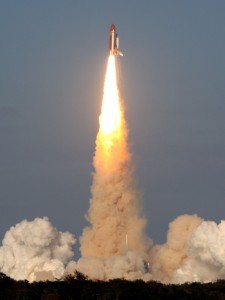 The flames shooting out of the bottom of the shuttle were scorching a line through the sky, leaving a thick trail of orangey smoke behind them. Within moments the shuttle was soaring high above us, to a soundtrack of cheering. Then came the first inkling of the rumble that went on to be a wall of sound so powerful it literally shook our cameras and our bones. The deep rumbling built to a crescendo of popping like the sound waves were ripping the air apart, bursting their way through to us. Had I not been there in person I would have assumed that it was a problem with the microphone distorting. It was like 1000 fireworks exploding all at once, with an accompaniment of an Earth-shaking rumble. As I said earlier – there are no words. No photograph can ever capture the brightness, no video will ever do the sound justice. I recorded the sound of the launch, which you could try listening to on big speakers with the volume up and your eyes closed, but it won’t be the same as being there. The sound silenced everyone for a moment, and then the cheering was back. The solid rocket boosters separated successfully and we followed the rapidly decreasing point of light as it flew faster and faster towards space. 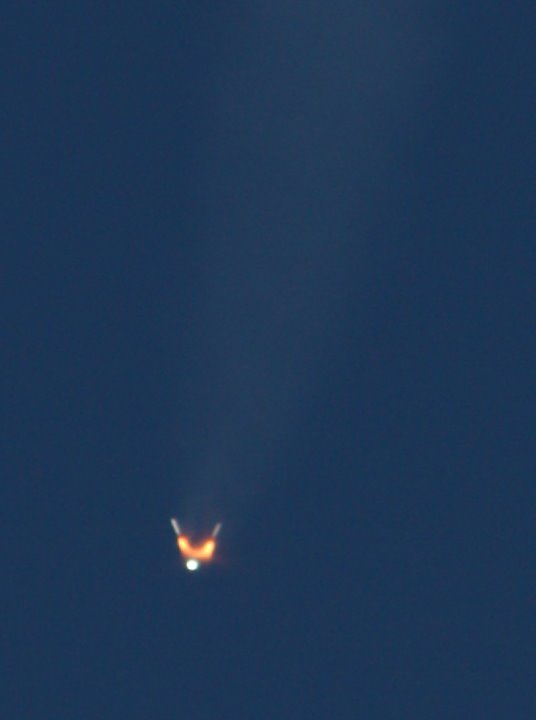 I was in a bubble. Despite all the people and noise around me, I felt detached from it all. I was part of the group experience, but I’d also had a very deep personal experience. I was speechless. How do you describe something like that? It was incredible. I was awe-struck.

I looked round. Karen was standing there. I’d heard her shouting “Go Mike!” as Discovery launched into the skies. Now she was just standing there like me, dumbstruck by what she’d just seen, but with the additional emotional layer of knowing someone on the mission. I knew what she was feeling, I’d been through the same thing watching Paolo rocket into space, even though I was only able to do that via that magic of television. I gave her a big hug. I needed one too.

There was so much inside me, I wanted to tell everyone what I’d just seen, but all the people around me had just seen it too. I called a friend, but found it hard to finish sentences, to find the right words. I needed to sit quietly and let it all sink in.

It wasn’t until about 11.30pm, some six hours later, that the ability to speak fully began to return to me, and it wasn’t until the next morning that I felt myself again. There are no words to describe the emotions related to watching a shuttle launch at such close proximity. Only now do I fully understand what people meant when they said to me “You have to watch a shuttle launch in person. You have to see it, hear it, and feel it”.

There are no words, so I’ll just end this blog by repeating that sentiment myself. You have to watch a shuttle launch in person. You have to see it, hear it, and feel it. You better be quick though – the shuttle programme is ending in the next few months. Do whatever you can to get yourself to a launch. You won’t regret it.

9 Responses to “My first shuttle launch – there are no words”